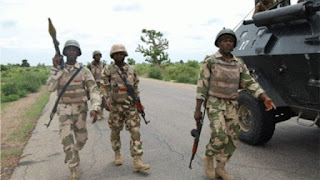 Although what led to the shooting of the soldier has not been made known yet, it was gathered that soldiers from the 222 battalions in Agbarha-Otor stationed in the area have gone on a rampage in protest of the incident.

Speaking to Vanguard on the condition of anonymity, a senior police officer from the Bomadi police station said: “We currently have a security situation in Bomadi as one of our men shot dead a soldier this morning.

“The soldiers are on a rampage and they have been attacking any policeman on sight and have already seized a police patrol van attached to Bomadi Division.”
at April 30, 2020