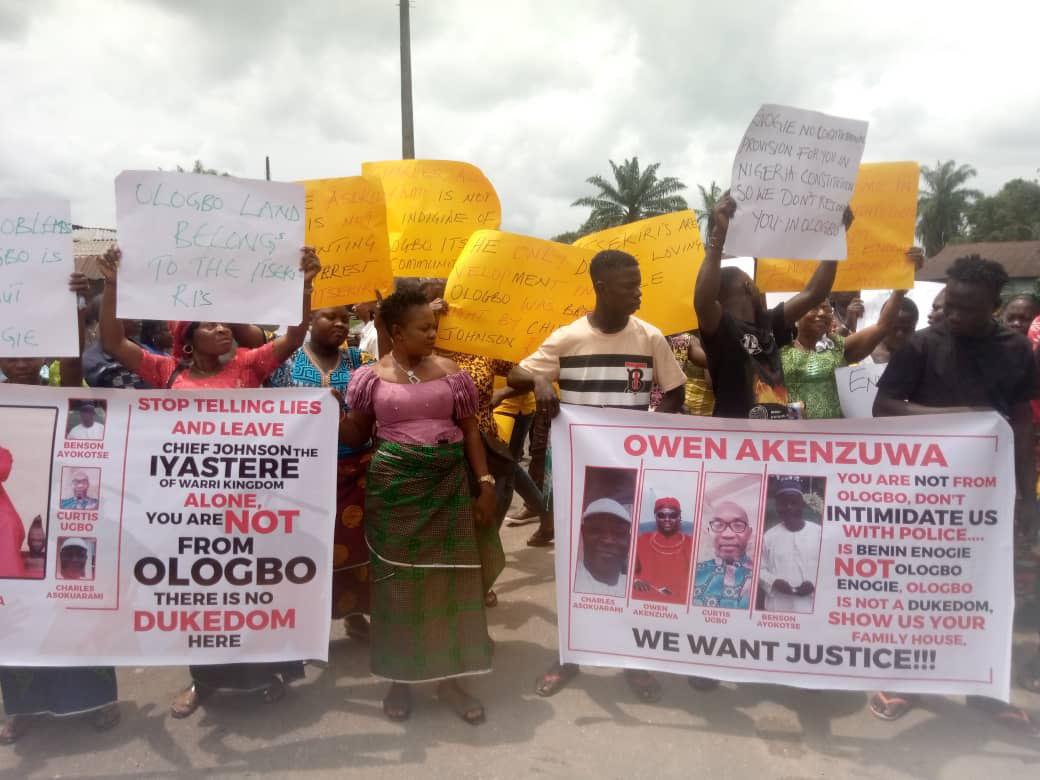 Indigenes of  Ologbo and other Itsekiri/Ijaws communities in Edo State have rejected the alleged imposition of a Benin ruler (Enogie) on them, saying that they are radically different in all ramifications from the Binins.

The people who protested the modern day colonialism in their age-long communities carried placards bearing such inscriptions as: “Enogie you are not an indigene of Kolokolo”, “Leave our community alone”, “Ajatiton is not under enogie”, “Nigeria Constitution does not recognize your position” and so on.

Addressing newsmen at the Ologbo Town Hall, Tuesday, October 13th, 2020 Mr. Greg Temisan Luma and Mr. Berlin Tiemo stated that they have their own traditional administrative structure in place since time immemorial even before the advent of colonial rule dating over 400 years in comparison with the 1988 “Enogie imposition” in Ologbo, saying that “we shall resist this aberration with the last pint of our blood”.

In a statement signed by representatives of all the Itsekiri/Ijaws communities in Ikpoba-Okha local Government Council Area of Edo State, they requested the immediate withdrawal of the letters from the enogie instructing the inauguration of new executives in the various Itsekiri communities of Ologbo, Ikara, Kolokolo, Ajoki, Ajamogha and Abiala1 and 2 respectively, insisting that the enogie has no such powers to so.

According to the statement, “the enogie should be cautioned to desist from inciting the people against one another for his own selfish interest and should also stop creating crisis in our once peaceful communities”, adding that “these communities predates the establishment of his purported dukedom that came into existence in 1988 as the Itsekiris have lived in these areas for over 400 years”.

They warned the enogie to desist from playing the ignoble role of a meddlesome interloper and busy-body in the internal affairs of the various Itsekiri/Ijaw communities and has no right to appoint people to manage their affairs for them.

While stating that they would not be subsumed or assimilated into the Benin tradition/culture by any means to tactically obliterate their identities and deprive them of their inalienable right to self-determination in modern Nigeria, they cautioned the enogie and his sponsors to desist from using security agencies and the Judiciary in Edo state to harass and intimidate them any further to coerce them into submission.

“It becomes highly ludicrous for somebody from another ethnic nationality to claim native authority over communities he does not relate to by birth or adoption, and even communities he has never been to and speak the native languages”, the statement emphasized.

They therefore called on all the relevant Federal and State authorities to call the enogie to order to forestall a total breakdown of law and order.