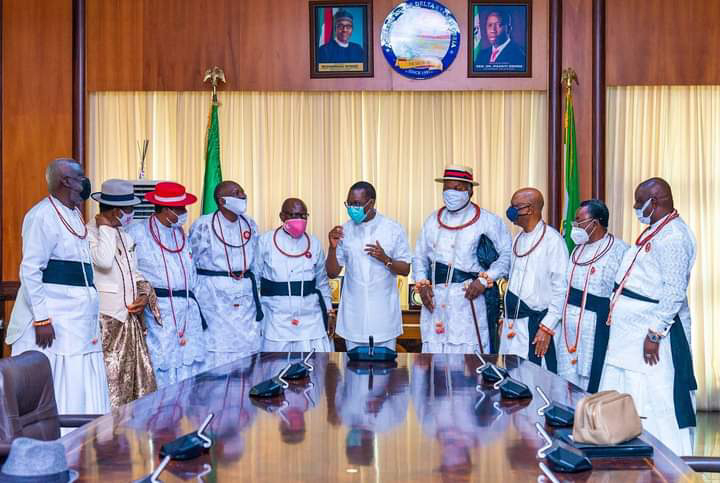 Itsekiri Council of Chiefs in a group photograph with Governor Okowa
Members of the Olu Advisory Council led by the Iyatsere of Warri Kingdom, Chief Johnson Atserunleghe, paid a courtesy call on the Governor today Thursday April 22, 2021 at Government House, Asaba.
The visit was to officially inform the  Delta State Governor of the passage of Ogiame Ikenwoli, 20th Olu Of Warri, and the introduction of the Olu designate, Prince Utieyinoritsetsola Emiko.
They further informed the State Governor of the ongoing funeral rights of the Olu of Warri as well as  preparations for the crowning and enthronement of the Olu Designate.
Responding,The Governor thanked the Itsekiri Council of Chiefs for their visitation and consoled the entire Itsekiri nation on the passage of the Olu of Warri who he described as a peacebuilder during his relatively short period on the throne, as well as acknowledged the crowning of the Olu designate.
Governor Okowa ended his response by wishing the Itsekiri people well and prayed for continued peace in the Itsekiri nation.
at April 22, 2021