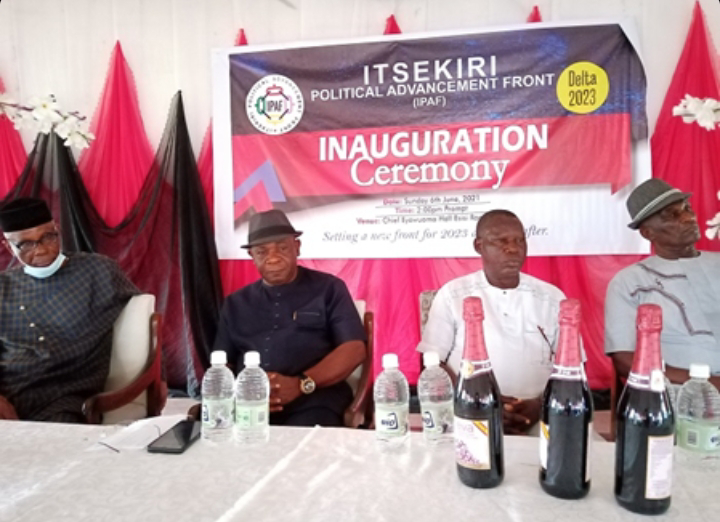 Opinion Leaders: Prof. Gabriel Yomere, Mr. Tunde Okorodudun, Mr. Fred Atikpekpe & Mr. Asifo Wyse
By Tetsoma Neyin
The Itsekiri Political Advancement Front under the aegis of IPAF has held its first National Conference with critical Itsekiri opinion Leaders in attendance to brain storm on the fate of the Itsekiri Nation in the forth coming 2023 general elections.
The pressure group which is made up of selected like-minded Itsekiri youths, made these demands for the Delta State Deputy Governorship position and Delta South Senatorial seat come 2023, saying the demands became necessary, reasons being that the Itsekiri Nation which has contributed immensely to the economic growth of the nation has been grossly marginalized in terms of leadership positions in Delta State and Nigeria, saying that from 1999 till now, no Itsekiri has occupied these elated positions. 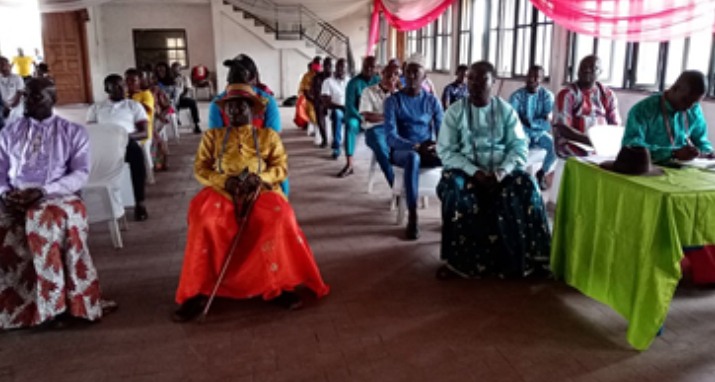 The National Chairman of the newly formed pressure group, Comr. Dennis Abugewa Mene, has made these outstanding demands during the inauguration ceremony of the executive body held at the famous Eyewoma hall, Esisi Road, Warri on Sunday June 6, 2023.
The event with the theme, “Setting a new front for 2023 and thereafter for Itsekiri Nation”, witnessed lots of Itsekiri sons and daughters in attendance.
In his address, the vibrant Chairman of IPAF, Comr. Mene who made the demands stated categorically that Itsekiris can no longer continue to be relegated to the bottom in the political scheme of things both at the State level and Federal level. 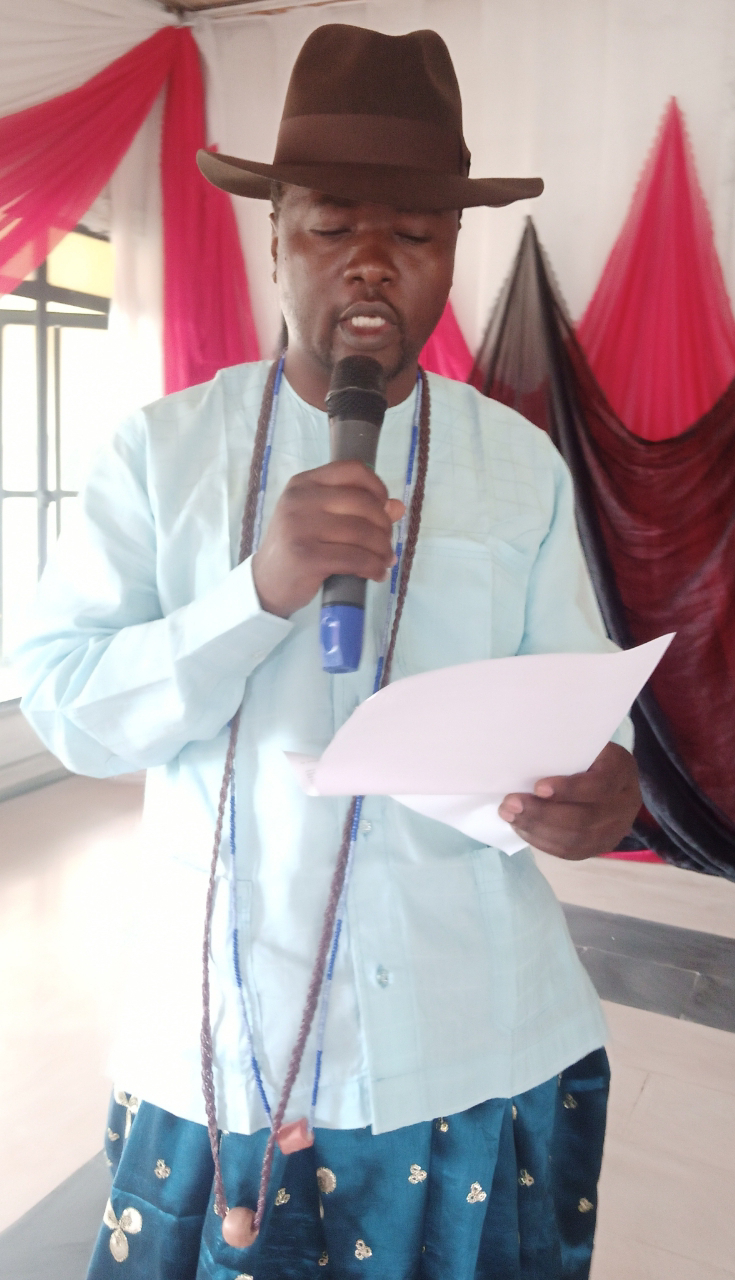 Newly Sworn in National Chairman of IPAF, Comr. Dennis Abugewa Mene, reading his speech
“The past 6 to 7 years have been a bitter pills for us to chew as a Nation. Despite our contributions to the National Economy and our peaceful disposition, we have been relegated to a Nation of Commissioner for Women Affairs and SAs at the State level and mere Board members at the Federal level. Hence, we have come together as a people of one Nation, one King and one language, to state our stand for our advancement as a Nation, through collaboration with other ethnic Nationalities and Senatorial District in the State and others," he stated. 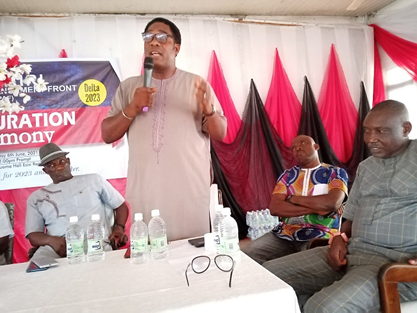 Comr. Mene stated further that “We are going to continue to throw our full support to the Executive Governor of the State and the President, but we will no longer tolerate a situation where we are treated like nothing with appointment that is undermining, despite our huge contributions being the largest producer of oil and gas in the state and second largest in the country. We have been relegated politically for too long. We would not continue to complain, but have decided to take our destiny in our hands to declare our stand as Itsekiri and our position as regards the future of our dear tribe. We wish to use this opportunity to call on all members of our political class, who have formed the habit of negotiating or trading with our heritage for personal gains at the detriment of our Nation, to desist from it as we will no longer tolerate such unpatriotic behavior. The Itsekiri people are now prepared to fight with their last blood, to restore the lost glory of the Nation in all areas"
“We therefore, wish to call on our brothers and sisters from other senatorial districts and our senatorial district (Delta South) for the sake of equity and fairness, to support Itsekiri indigenes as Deputy Governor and Senator Representing Delta South Senatorial District. This is because from 1999 till date, no Itsekiri has occupied these positions and we have given maximum support to others in their political pursuits.”
The vibrant National Chairman, noted that the group is willing to collaborate  with other ethnic Nationalities and politicians, who are  prepared to build bridges of mutual political benefits for the collective interest of the Itsekiri people," he opined. 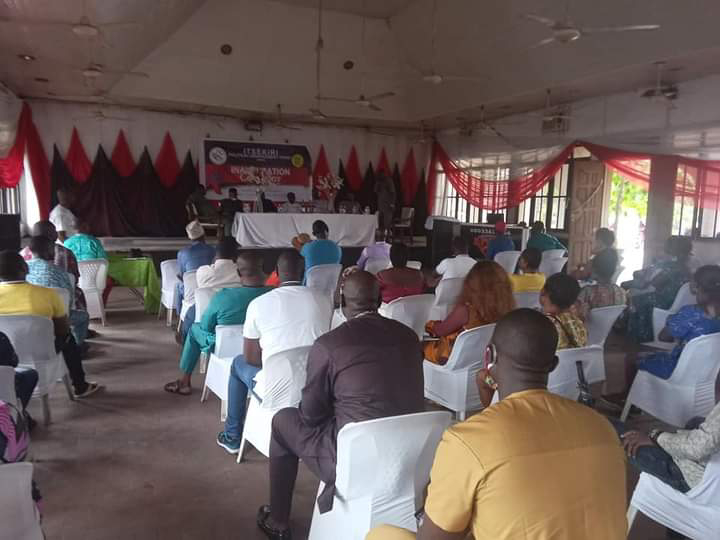 Participants at the event.
Chairman of the ceremony, Sir. A. S. Mene who was ably represented by Mr. Fred Atikpekpe,  said that, going forward, the Itsekiri Nation must have a political clean-out and set a political debate, to produce the best representatives for the tribe.
Astute Itsekiri activist and University Don, Prof. Gabriel Yomere, in his speech, stressed on the need for Itsekiri Nation to have a strategic plan as well as put machineries in place to actualize her political goals in 2023 and beyond.
Prof. Yomere who expressed fears about the possibility of conceding political leadership of Warri South to another tribe as was the case in Warri South-West and Warri North Local Government Areas, averred that “The self-seeking individuals, controlling the political and economic lives of Itsekiri Nation, would not have succeeded, if we didn’t support them.”
Mr. Amaechi Omagbitse Ogbonna, who gave a chronological presentation of Itsekiri political history, said that Itsekiri Nation in the defunct Mid-West and Bendel States, during the 1st, 2nd, and 3rd republic enjoyed a good political edge and control, but eventually lost political relevance in the 4th Republic, saying that Itsekiri political leaders from 1999 till date never negotiated for the tribe in PDP and APC, rather for their selfish gains.
Other Itsekiri opinion leaders who also remarked on the way forward are; Mr. Tunde Okorodudu, Dr. Jeffery Wilkie, Mr. Charles Lori, Asifo Wyse, Comrade Collins Edema, Mr. Esimaje Awani and Prince David Odeli.