Upgrade College of Education, Warri to a University - Prof. Edema

Upgrade College of Education, Warri to a University - Prof. Edema 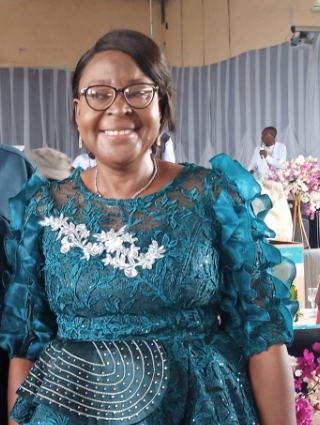 Prof. (Mrs.) Mary Olire Edema
By Tetsoma Neyin
The out going Provost of College of Education, Warri, Prof. Mrs. Mary Olire Edema has called on the Government of Delta State and all Delta State politicians to upgrade the College of Education, Warri to a full fledged University, saying that the College has all the academic standard to function as a University effectively.
The astute academician made the statement during her valedictory speech in the just concluded send forth ceremony organised in her honour by the College to commemorate her outstanding contributions to the success of the College on Thursday June 17, 2021. 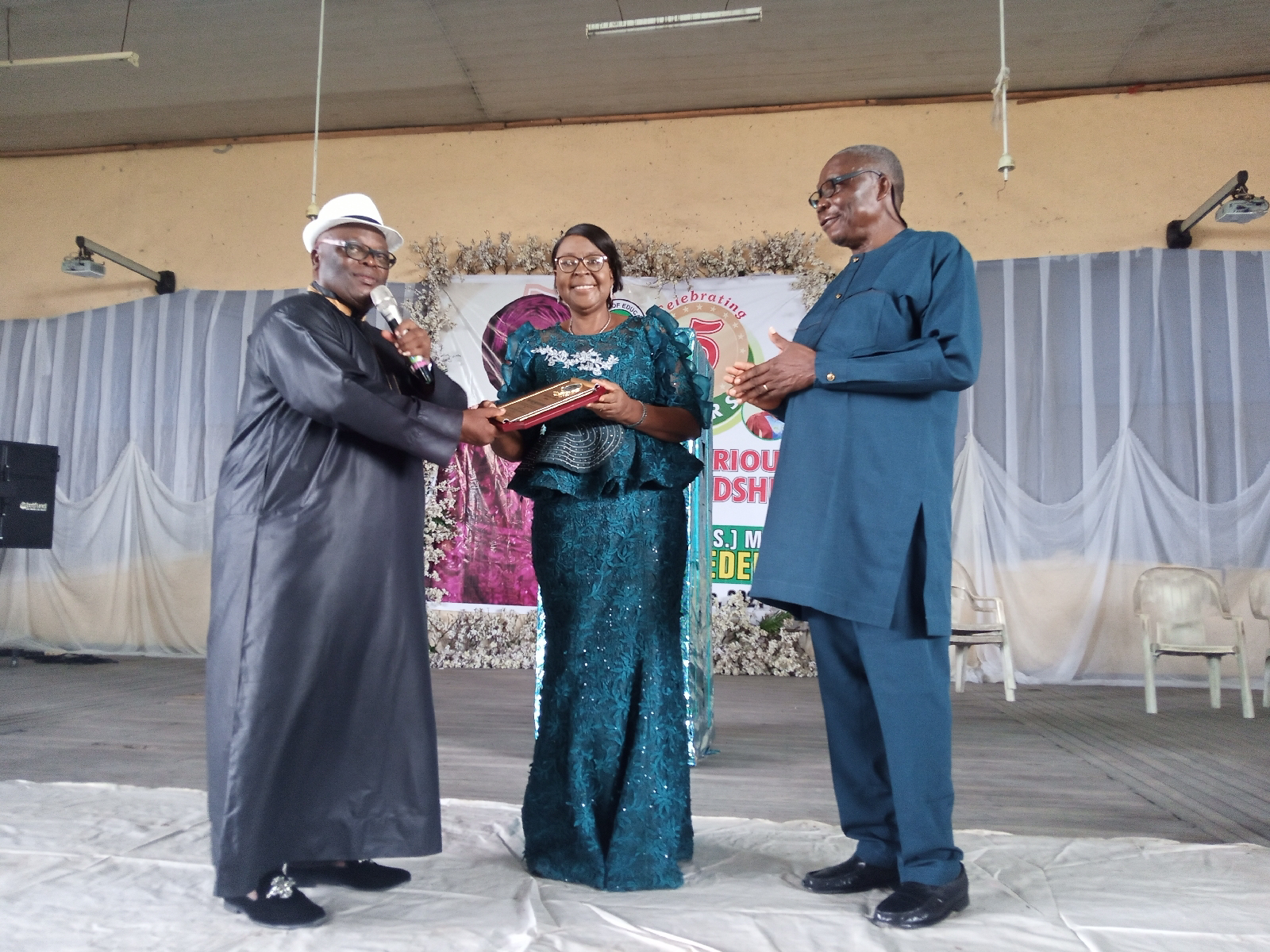 Chairman, Governing Council of COEWA, V.O. T. Abanum presenting award of Excellence to Prof. Edema while Mr. Clarkson Olire(husband) looks on
Counting on her enormous success she has achieved in these five years of service and people who have made it possible, the first female Provost of COEWA said " I sincerely appreciate the former Chairman of COEWA Governing Council, Prof. Sam O. Aghalino and all the members of his Governing Council for deeming me fit to be among those recommended. There are persons, destiny helpers, that God positions in one's path at the appropriate time to help achieve a dream that He, the Almighty is part of. These persons include, but not limited to His Majesty, Ogiame Ikenwoli , the Olu of Warri, of blessed memory, Dr. Kingsley Emu, Rt. (Hon.) Festus Ovie Agas, Prof. Sam Oyovbaire, Prof. Emmanuel Nwanze, Prof. Patrick Muoboghare and Prof. G.O Yomere, among others”.
Prof. Edema further stated however that, the NCE programme is gradually loosing relevance  due to the strict process of gaining admission into the College.
“The annual enrolment of College of Education is reducing every year as many students, even if not qualified for universities, want to go there at all cost and if not possible, will opt for Polytechnics, instead of a College of Education, for a number of reasons. On the onset of the College, persons with two credits were qualified to be admitted as long as they have  the credits in the subject area of study. When they finished and have to go to the University, they are admitted for two years programme.
"Gradually, this was changed. They are now to have four credits and run three years in the University while the OND which initially was lower than NCE spend just two years to get HND which is equivalent to a degree. It would seem the NCE was relegated", She averred. 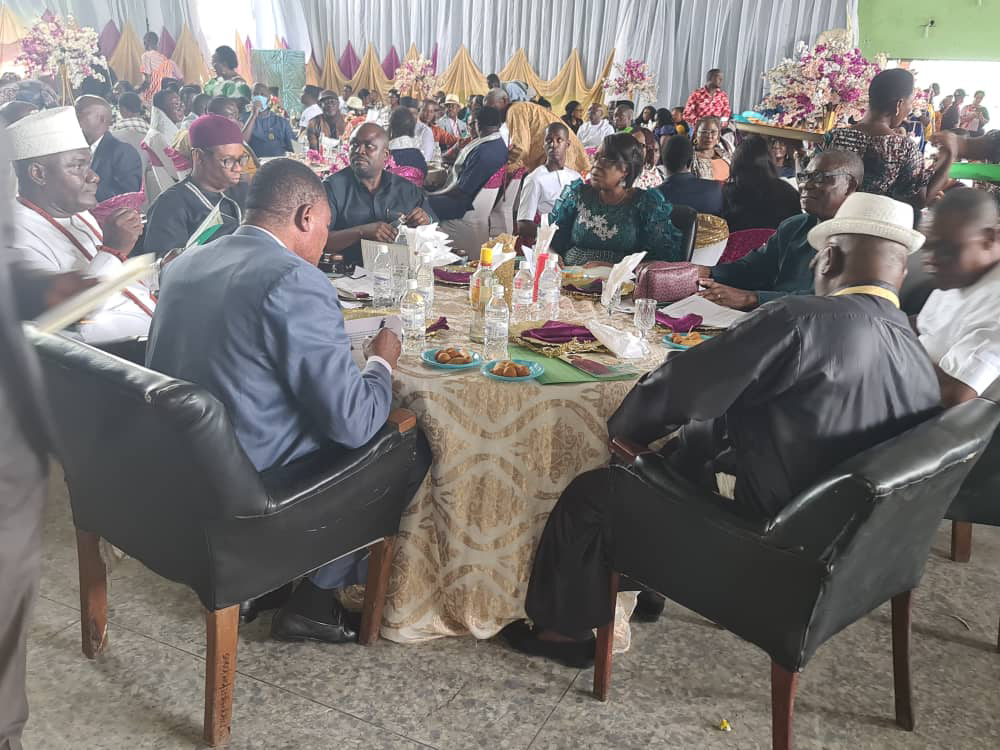 In his address, Chairman of the Governing Council of COEWA, V.O. T. Abanum, outlined the core stewardship of the outgoing Provost, Prof. Edema to include; Upgrading of ICT facilities with the installation of solar energy at the ICT Block, increase in the quantities and qualities of computer hardware, smoothening of the hitherto rough-edged relationship between TETFUND and College of Education, Warri, by completing some of the abandoned projects from previous administrations, improvement of academic standards among Staff and students, attraction of the University of Benin Affiliate Programme to the College, which has seen the school grooming graduates at degree levels, marginal increase of the Internally Generated Revenue, IGR, of the Institution, enhanced staff participation at Conferences and Seminars, locally and overseas, which in turn impacted positively on the academic and social status of the College, acquiring of Ph.Ds by a lot of staff under her watch, ongoing hostel infrastructural project and the award of contract for the construction of entrepreneurship acquisition building.
Mr. Abanum who stated that Prof. Edema do not have any record of abandoned project to her credit, expressed worries on the embargo placed on employment in the Institution  “lots of vacancies have been created in every employable aspect of the College Administration, thanks to retirements, promotions, searches for greener pastures, etc, I do not need to catalogue the attendant consequences of leaving these vacancies unfilled. Consequently, I wish to make an appeal to His Excellency and the government to kindly do the needful in this regard".
The Provost-Designate of COEWA, Dr. Dickson O. Oyovwi, in his address, stated "today's celebration of 5 years of meritorious service/send forth party in honour of Prof. (Mrs.) Mary Olire Edema, is part of the transition programme to the historic date. I am happy and grateful to God Almighty that I am part of this history making. The shoe I am about to take over is oversized, but I pray that God Almighty will grow my feet to fit into the shoe. I have been in this College for over twenty years and served under many Provosts. However, to the best of my knowledge, this is the first Provost being officially send-forth by the College. This is because of the smooth transition we lacked in the past". 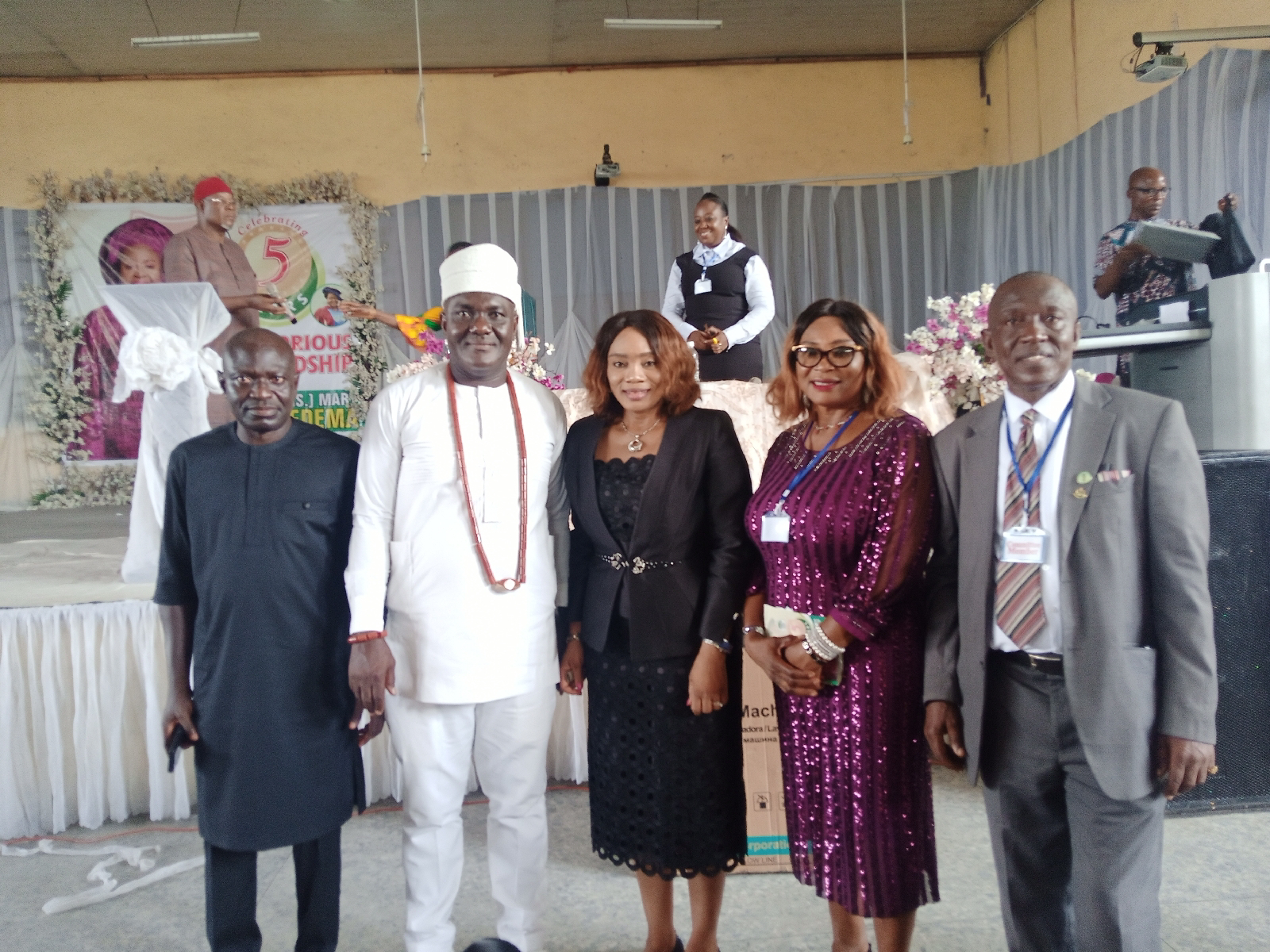 The Provost-Designate of COEWA, Dr. Dickson O. Oyovwi(2nd left), Deputy Provost COEWA, Warri, Dr. (Mrs.) Fidelia Ighrakpata(3rd right) & others
Dr. Oyovwi thanked the College Governing Council led by  Chief Vander-Puye O. T. Abanum, the College Management under the hegemony of Professor (Mrs.) Mary Olire Edema, for putting the structures in place for a smooth transition, stating that he would do his best to build a united management team to sustain her good work. 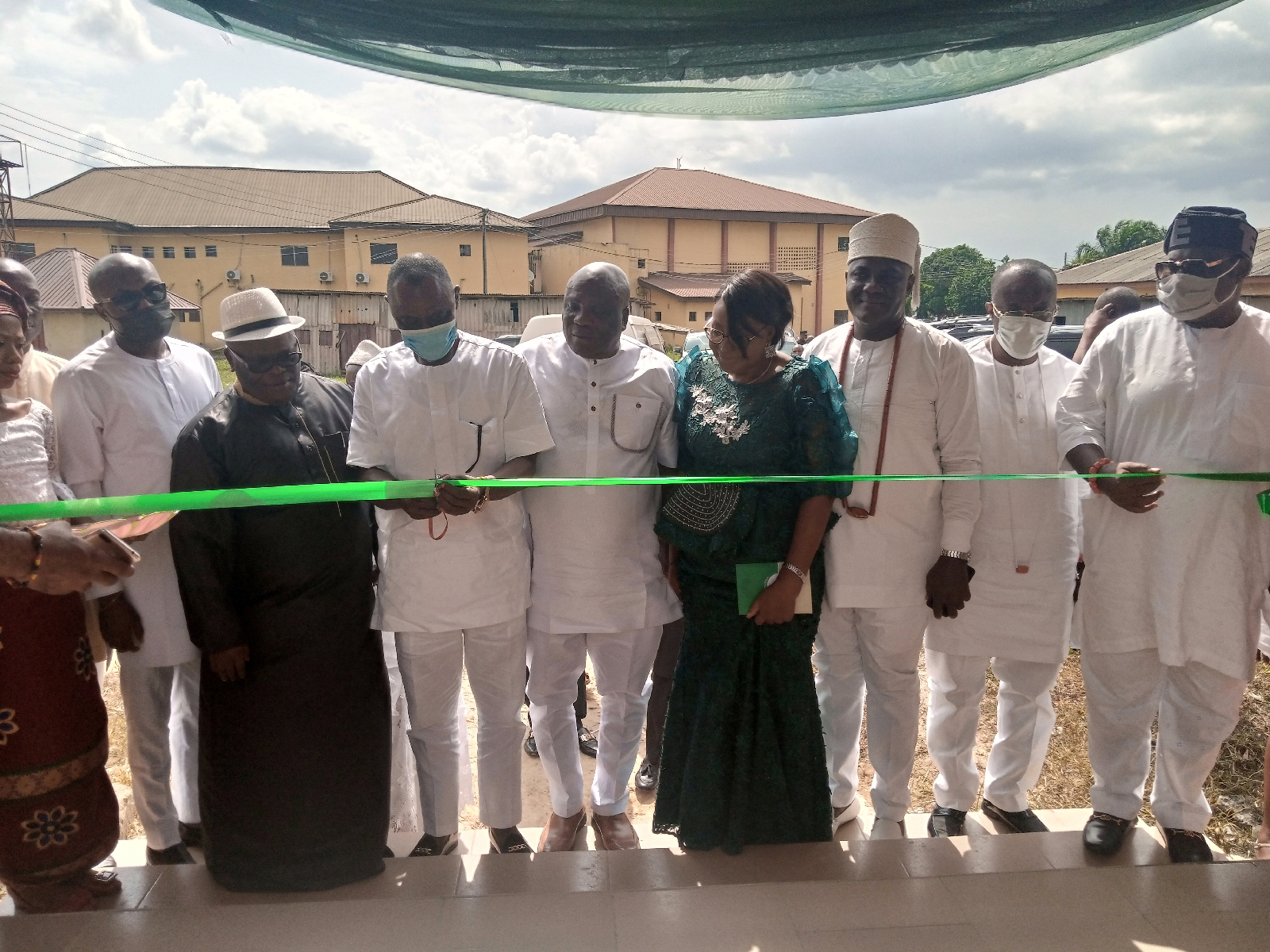 Chairman of the Event Planning Committee and Deputy Provost of College of Education, Warri, Dr. (Mrs.) Fidelia Ighrakpata, in her welcome address, described Prof. Mary Edema as a woman of many talents and icon of our time, saying that, the management will continue to seek her wise counsel in order to move the College forward.
Member representing Warri Federal Constituency in the House of Representatives, Chief Thomas Ereyitomi, who unveiled the book on the 5-years Meritorious Stewardship of Prof. (Mrs.) Mary Olire Edema, as Provost of College of Education, Warri and also laid the foundation for the entrepreneurship centre initiated by Prof. Edema, described the send-forth ceremony of the out-going Provost as unique in her life, the life of the incoming Provost and the entire Institution. 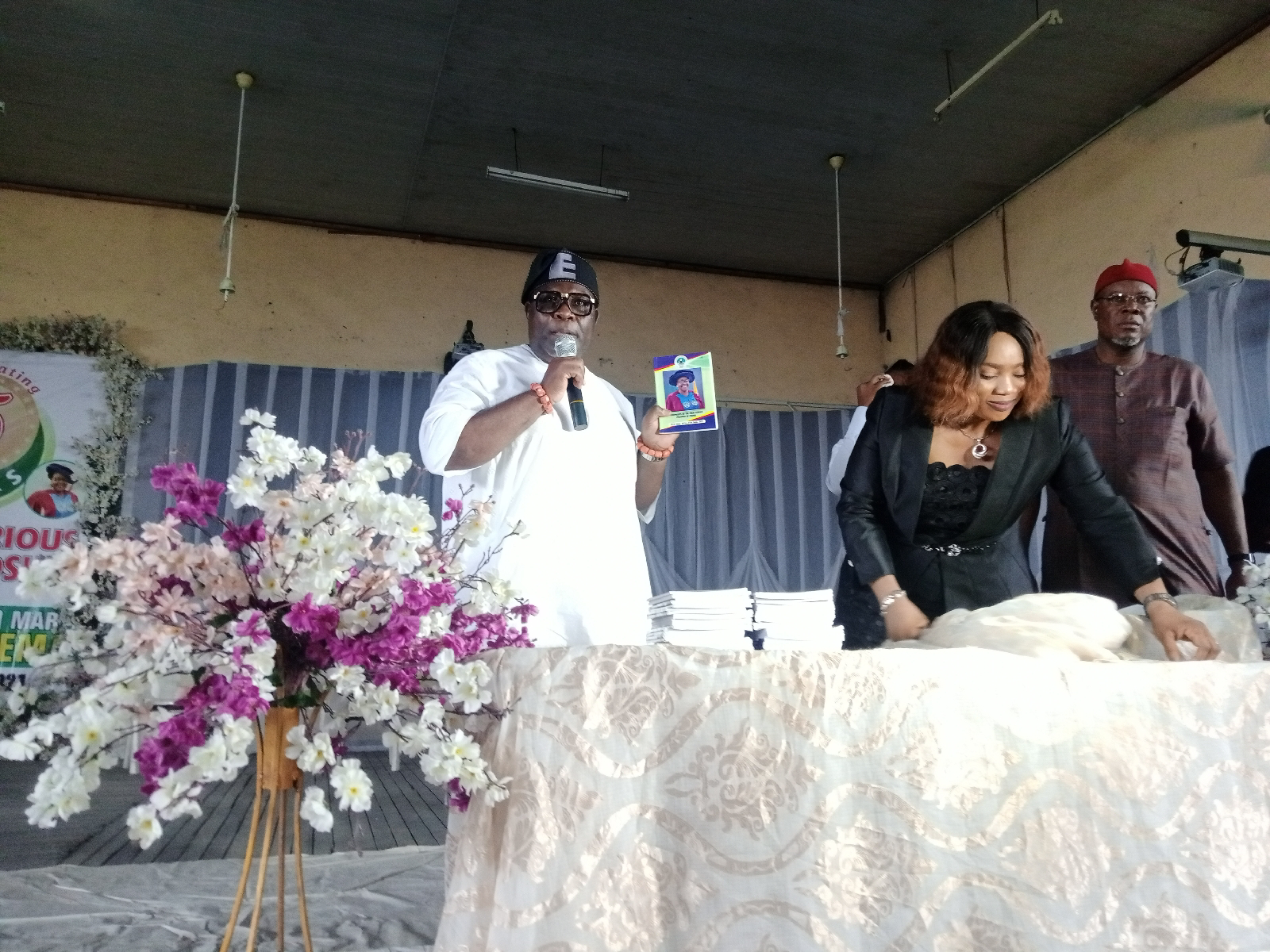 Member representing Warri Federal Constituency in the House of Representatives, Chief Thomas Ereyitomi launching the book
A former Delta State Commissioner for Higher Education, Prof. Patrick Muoboghare, commended the achievements of Prof. Edema saying that anybody can be a Provost, Governor or Commissioner, but the difference between one Provost and the other is what you bring to the table. 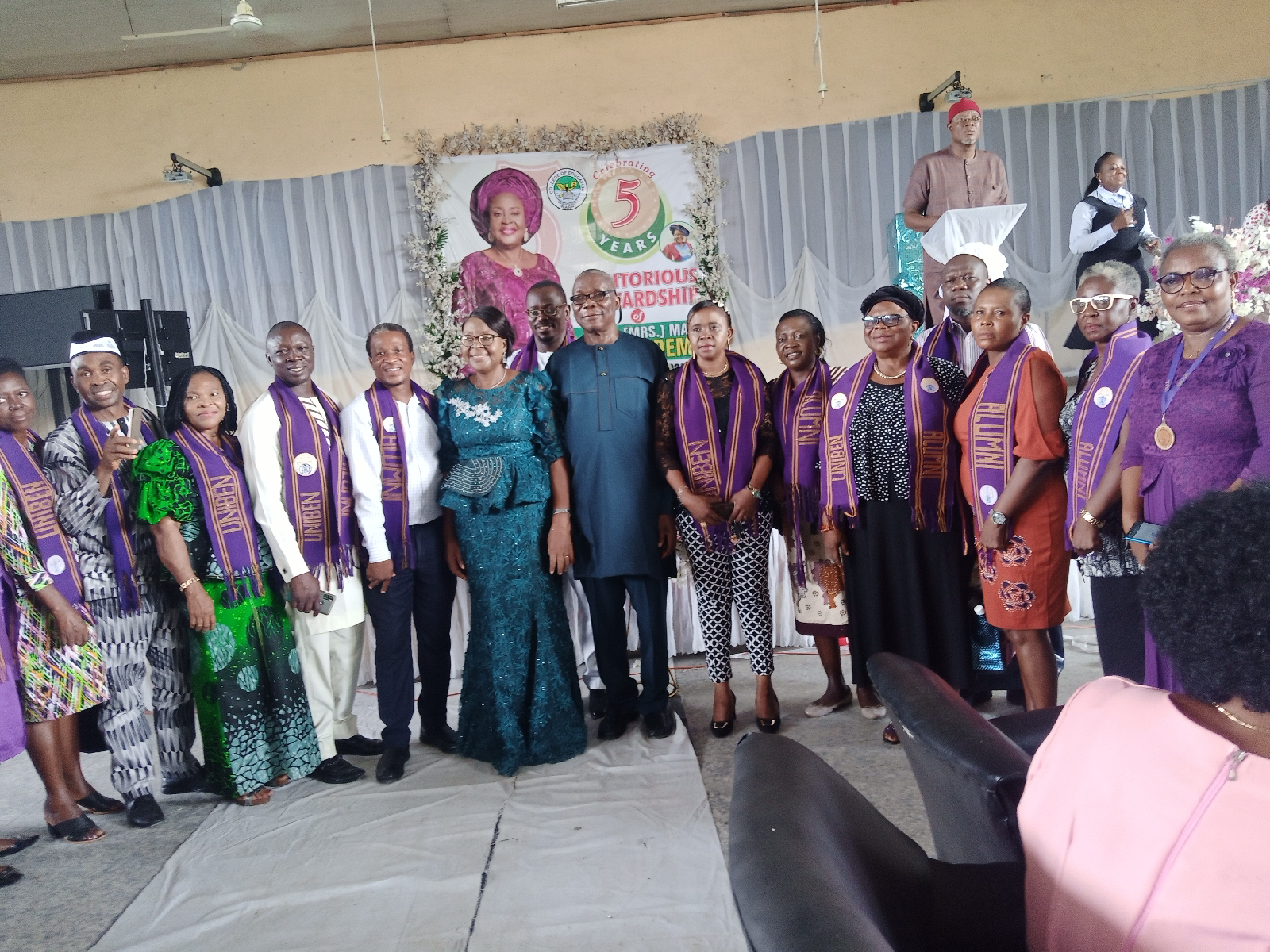 Mr. &  Prof. (Mrs.) Olire Edema in a group photograph with UNIBEN Alumni
Climax of the well attended ceremony  were the unveiling of the book on Prof. Edema’s Transformational Leadership and the Commissioning of Completed Projects, some of the projects which was financed by Tetfund were  inherited and others initiated by the Prof. Edema leadership of the Institution as well as the presentation of award of Excellence to Prof. Mrs. Mary Olire Edema.
at June 19, 2021