The Olu Designate, Omoba Tsola Emiko(middle), Chief Johnson Atserunleghe & Chief Roland Oritsejafor in a group photograph with members of National Association of Itsekiri Graduates (NAIG)
By Tetsoma Neyin
The National Association of Itsekiri Graduates(NAIG), an umbrella body of all Itsekiri graduates has paid a Courtesy visit to the Olu of Warri Designate, Omoba Tsola Emiko in his G.R.A residence in Warri where he is currently undergoing his Idaniken rite(Isolation), today Wednesday July 21, 2021.
The National President of the Association, Comr. Ben Eyitemi Eburajolo in his address intimated the Omoba,  the core values of NAIG as well as achievements and constraints faced by the noble Association.
Comr. Eburajolo who highlighted some of NAIG outstanding achievements to include; Scavenge for job slots for our members from the IOCs working in our land, State and Federal Civil Service, Government Parastatals and Private firms, Free tutorials for students for the past 15 years, Free WAEC enrollment for over 200 Itsekiri indigent students, grant Scholarship to an Indigent Itsekiri child to further her education, engage in Community Services, distribute Itsekiri learning and writing materials across schools in the 3 Warri LGAs and be in the forefront of some Itsekiri struggles. 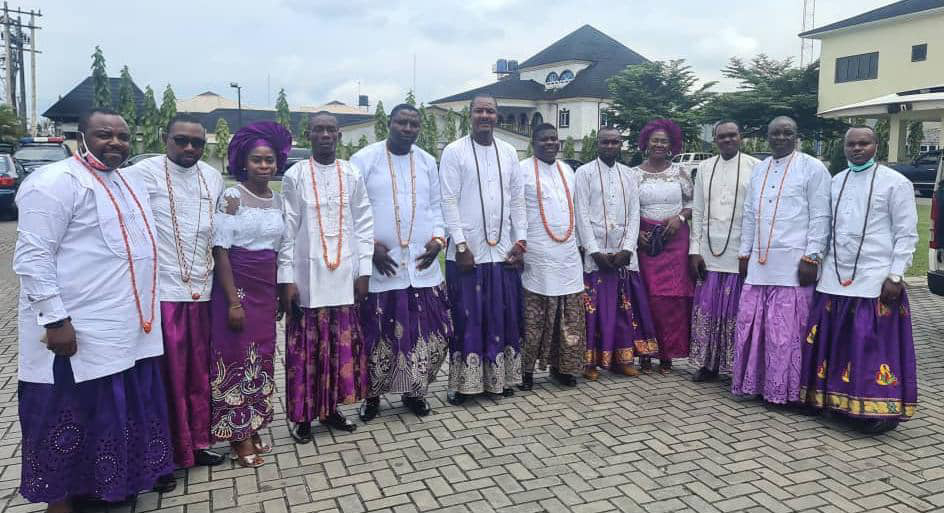 Executives of National Association of Itsekiri Graduates led by their President, Comr. Ben Eyitemi Eburajolo(7right)
Comr. Eburajolo who went further to state some major challenges of the Association as lack of funds, lack of supports from Itsekiri leaders and the association not been carried along in the affairs of the kingdom despite its rich and abundant intellectual capacity, appealed for more support from the Palace, adding that the Association is always ready to work with the Palace in any capacity assigned to them.
"We have no doubt that once you ascend the throne of your Forefathers as the 21st Olu of Warri kingdom, the narratives will change and NAIG will smile again and we will regain what we have lost over the years. You have been of great help to the association even when you never knew you will ascend this accent throne of your forefathers", he concluded.
Responding, the Olu of Warri designate whose Grand Coronation Ceremony has been slated for Saturday August 21, 2021 at Ode-Itsekiri Olu(Big Warri), thanked the alumni body for their efforts thus far and promised to work with them especially in the area of infrastructure.
Other notable Chiefs of the Palace present are; Chief Johnson Atserunleghe(Iyatsere of Warri kingdom), Chief Gabriel Awala,(Uwangue of Warri kingdom), Chief Yaya Pessu, Chief Clement Akpeto, Chief Eugene Ikomi, Chief C.D. Ikomi, and Chief Roland Oritsejafor.
at July 21, 2021 No comments: 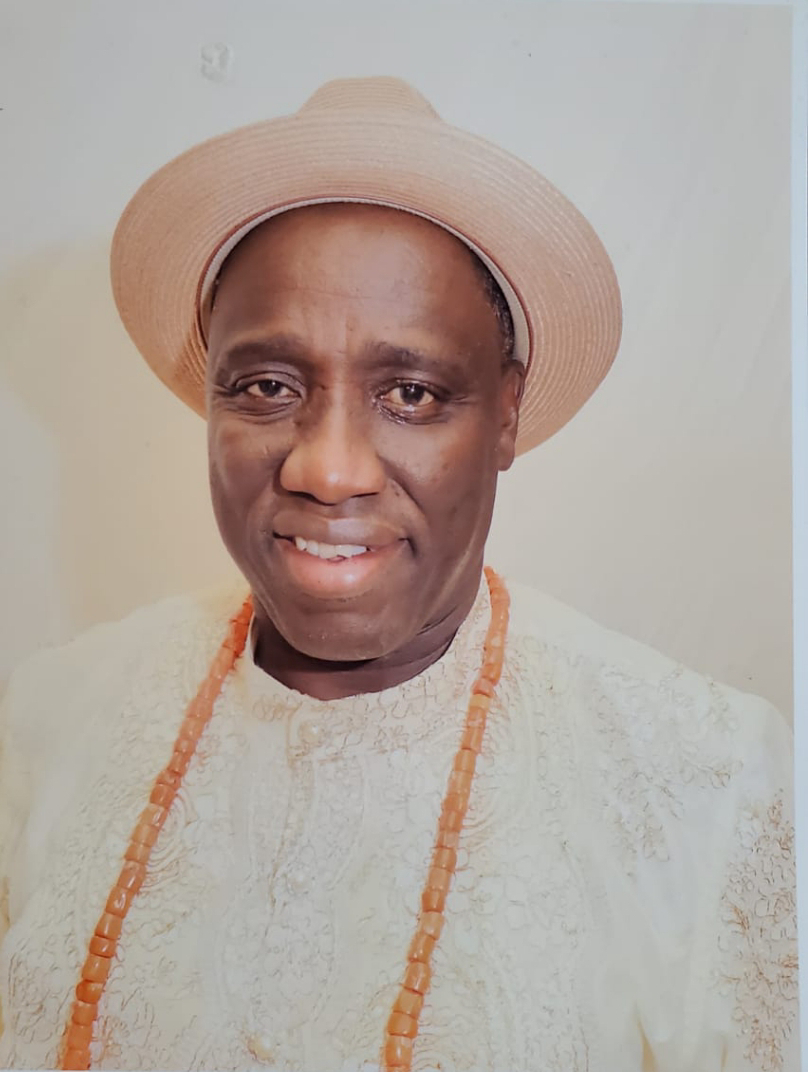 Mr. Kingsley Onuwaje
(President, Ugbajo Itsekiri USA)
All is now set for the long awaiting three days convention of Ugbajo Itsekiri USA Inc. which has now been scheduled for Friday September 3 through Sunday September 5, 2021 Labour Day weekend.
According to the President of the renowned charitable organisation, Mr. Kingsley Onuwaje who spoke to Warri Voice Newspaper in a telephone chat recently stated that among other activities lined up for this year’s convention, is the general election for a new executives that will take over the baton of leadership from Mr. Onuwaje’s led executives which will be held in Dallas, Texas.
at July 20, 2021 No comments: 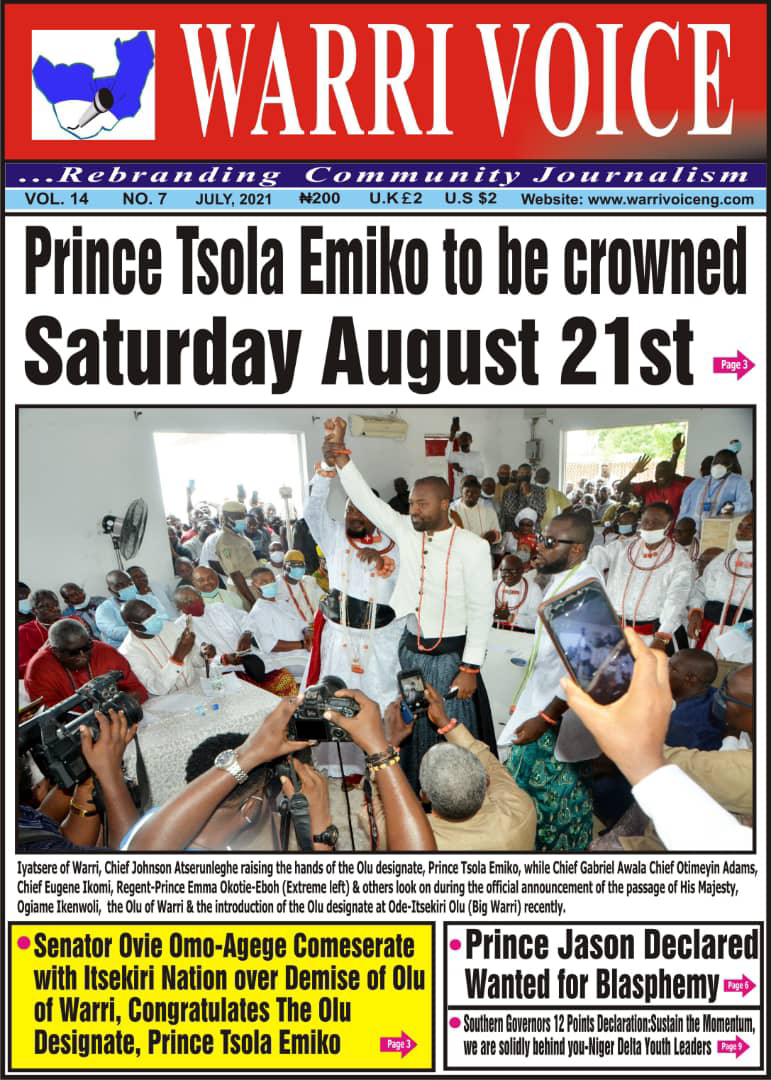 A controversial and ardent criminal, Mr. Godswill Urunmatsoma Alias Prince Jason has been declared wanted by his community and religious organizations due to his blasphemy and outright rebellion against his community and Nigerian government.
Prince Jason has severally blasphemed the Christian religion and also attacked Muslims regarding them as those that lost their roots and worshipping fake foreign religions.
He has severally escaped arrests because of his networks of informants that are his associates and partners in crime.
Prince Jason was regarded as brain behind some strong opposition to the tradition of his people in the Niger Delta and this has led to the death of three prophets that opposed his stance on religious matters which he regularly posted on his whatsapp platform and facebook.
He was believed to have been a leader and has championed some secret movements that are strongly at variance with the culture and tradition of his people.
The Federal Government of Nigeria has declared him wanted to face trial for his negative actions against constituted authority and back in his home in the Niger Delta he was to be beheaded for the level of crimes he has committed against the tradition and the people.
Due to his controversial statements condemning Jesus Christ and Mohammed which he regarded as doctrines to brainwash Africans, many people are angry that he should not be allowed to live.
He wrote that Africans are worshipping Deities (Christianity and Islam) brought to them by slave masters, stressing that black men should be ashamed of themselves. He derided Africans by saying Arabs slave masters brought them Islam and took our women as sex slaves and killed many of the men through slave raiding which they did for about three centuries and urged Africans to abandon Islam religion considering it as evil.
He also said that Europe slave masters that brought us Christianity are not different from the Arabs as the Europeans stole and still stealing our natural resources and polluting our waters, but Africans believed in prayer instead of having a serious thinking of going into research and create economic and technological growth and development.
He accused Europeans that King Leopold II of Belgium killed 15 million Congolese and stole their natural resources and enslaved them with this same religion.
He has also desecrated the land and attacked the Monarch of his Kingdom in the Niger Delta which was regarded as sacrilege with severe consequence such as death or banishment.
Prince Jason recalled that several Nigerians and other Africans get drown everyday crossing the Mediterranean Sea just to cross to Europe for greener pasture, whereas Africa has more natural resources than Europe, but due to bad and selfish leaders Africans are living like slaves in their own land, stressing that he has planned to carry out revolution against evil and wicked leaders and government in Nigeria.
Prince Jason is the reason the First son of Mr Mene a primary school teacher in Ubeji went missing in Ikeja as he was good friends with him and had phoned him to come help get his phone from a Muslim boy whom he accused back in 2011 about robbery of phones and laptops which led to a very serious fight in the North and  few weeks later this great son of Itsekiri was nowhere to be found.
His Aunty Eriwu's house was burned down in that incident and business destroyed which has caused her some mental disorder up till today.
He has been causing big problems for everyone around him since a decade now due to his beliefs that he hears direct from God and is the mouth pix of Oritse.
According to some youths of Obonteghareda Community, he has refused to make payments for money borrowed to him to fund his masters programme in the UK and has made a statement that he is entitled to free education for breathing in polluted air for over 20 years as a result of oil exploitation and that leaders of his community are greedy to give  money for education with over 100% interest.
The one that provoked the Nigerian youths mostly is his involvement in gay practices and his stance on Endsars protest in Nigeria against leaders and masses which he posted on his WhatsApp and Facebook pages saying"you are all terrorists and murderers and worse than SARS".
Recalled that one of the siblings of Prince Jason, Master Ebiyon Urunmatsoma went missing and as at the time of filing this report, his whereabout is still unknown and this Warri Voice gathered authoritatively that it was due to the actions of Prince Jason.
Angered by all these, his father, Mr. Johnbull Urunmatsoma who has received several maltreatment and threat to his life and close family members, especially his wife due to his son's actions, has disassociated himself from him and publicly disowned him.
at July 13, 2021 No comments:

Group Urges Mayuku To Contest For House Of Reps

Group Urges Mayuku To Contest For House Of Reps 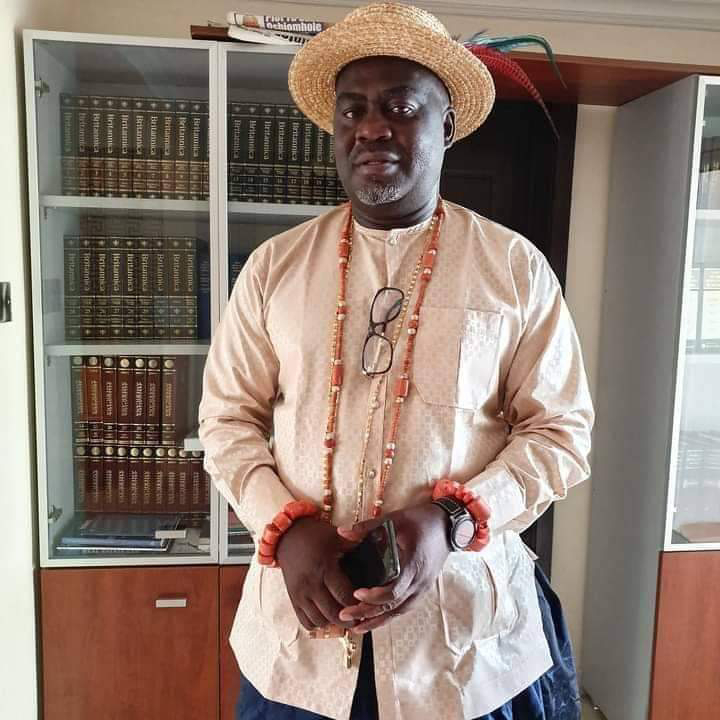 Hon. Daniel Omayone Itsekiri Mayuku
A dynamic socio-political group popularly known as Mayuku Political Front (MPF), A.K.A we support Hon. Mayuku has called on its leader, Hon. Barr. Daniel Omayone Itsekiri Mayuku, the Executive Director of Projects at the Delta State Oil Producing Areas Development Commission (DESOPADEC) to contest the forthcoming election in 2023 to represent Warri Federal Constituency at the National Assembly, Abuja.
The group led by their Coordinator, Hon. Friday Asamah and one of their pillars, Mr. Daniel Aduren spoke to newsmen after their meeting in Warri that they are overwhelmed by Hon. Barr. Mayuku performance when he was a law maker at the Delta State House of Assembly (DTHA) in terms of  developmental projects and empowerment programmes.
They disclosed that Hon. Mayuku remains a trusted and tested politician who has the interest of the people at heart, stressing that if such a person becomes a member of House of Representatives more people will benefit from his stewardship to his constituency.
According to the group “the people of Warri Federal Constituency will enjoy more dividends of democracy in terms of development and empowerment for the people”.
The group said any moment from now, they will embark on sensitization campaign programme to the three Warri Local Government Areas to drum support for Hon. Daniel Mayuku.
The group stated that they trust Hon. Mayuku through his leadership skills, capacity, ability, resourcefulness, patriotism and love for his people.
Members of the group drawn from the three Warri Local Government Areas pledged to give massive support to Hon. Mayuku to become the next House of Representatives member in 2023 for Warri Federal Constituency.
at July 01, 2021 No comments: