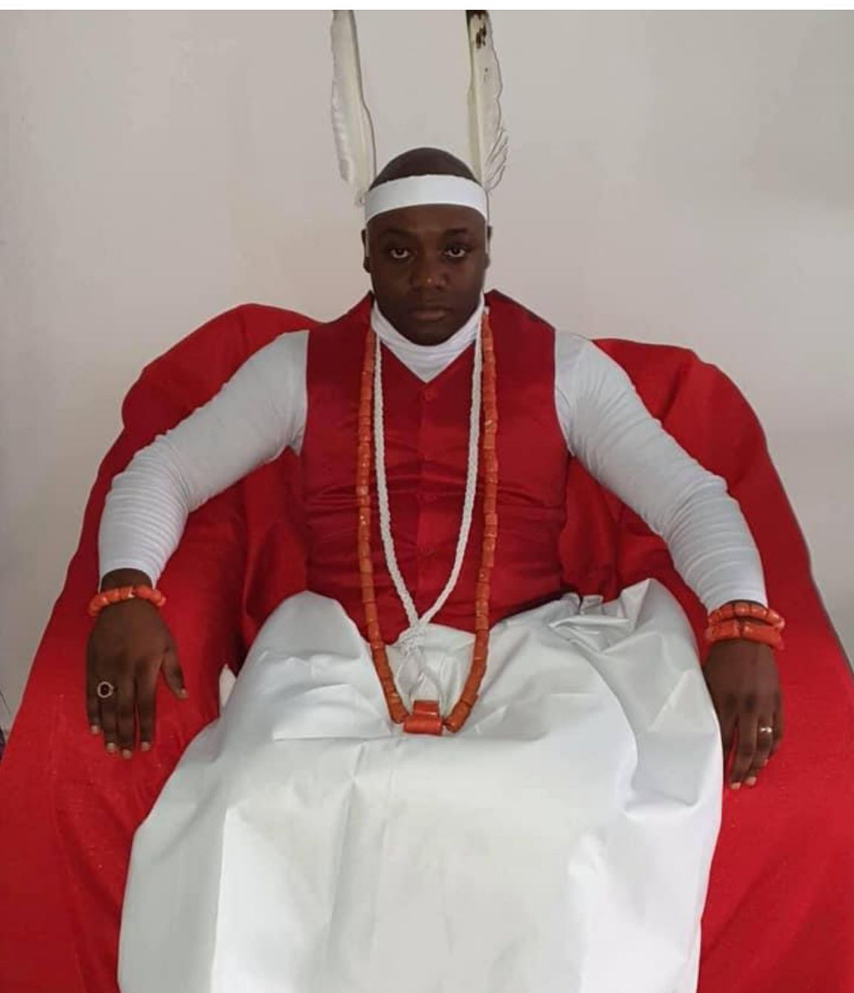 Prince Oyowoli Emiko
The Itsekiri National Youth Council, an umbrella body of all Itsekiri youths worldwide at a press conference which was held on Wednesday August 4, 2021 at the Palace of the Olu of Warri, has declared Prince Oyowoli Emiko a persona non grata for the sacrilege he committed by mimicking the Itsekiri people's highly revered Omoba status on various media platforms and without coming out publicly to deny same.
The embattled Prince Oyowoli Emiko was challenged to stop playing the ostrich and asked to provide answers to the following questions or perpetually stay off the kingdom for trying to hoodwink the unsuspecting general public under the guise of a factional Omoba.
The questions which was put forward by the group are;
1. Where is the address of his Idaniken (seclusion abode)?              Since his dressing suggest such,it is only appropriate to make it known so that we can come and visit him as the entire Itsekiris are on daily basis visiting our Omoba Tsola Emiko in Warri GRA.
2. The Royal cemetery where he performed the Iken rites and was proclaimed Ogiame?
3. Can he provide the venue and date of any Itsekiri National Assembly where he was proclaimed Ogiame-designate after the announcement of Ale J’efun?
4. Can he provide details of the composition of the Ginuwa 1 Ruling House and venue where he was presented by the Emiko Royal Family?
5. Who and who makes up the Olu Advisory Council/Ojoye-Isan that recieved and presented him before the Oracle and the outcome of such divination?
6. How many Chiefs out of the entire Chiefs in the palace are with him in this ignoble journey of his?
7. Why did he make a u-turn and resulted to self help even after he has gone to seek redress in court?
Since the issue of the emergence of an Olu of Warri is a process and not an event where anyone just emerges out of the blues, Prince Oyowoli’s readiness to provide answers to all the above questions will go along way to clear the air whether or not he is not a mere meddlesome interloper.
Furthermore, the President of the prestigious Itsekiri apex youth organisation also went on to clarify that no one can disqualify Omoba Tsola Emiko presently and in the future.
This position he said was corroborated by the universal declaration of human rights as endorsed by the United Nations General Assembly and domesticated in all continents and countries of the World.
"The Banjul Charter otherwise known as the African Charter and chapter 4 of our 1999 constitution (as amended) are examples. No one can disqualify Omoba Tsola Emiko from ascending the throne occupied by his father about 5 years ago simply because his mother is Yoruba. Doing this will amount to a serious breach, infringement and infraction on his fundamental human rights as contained in all the legal instruments cited above", he averred
The President, Comr. Agbateyiniro Weyinmi further stated that "It goes without saying that if the declaration pursuant to the 1979 edict of the defunct Bendel State now applicable to Delta State is juxtaposed with chapter 4, subsection 1 and 3 of section 1 of the 1999 constitution as amended, the relevant provisions of the 1999 constitution will have its way
The five aboriginal communities of Ureju, Omadino, Ode-Itsekiri, Ode Ugborodo and Inorin that metamorphosed into all the Itsekiri communities of today are all Yorubas.
Itsekiri, illaje, ijesha, Okun, Ekiti, ijebu etc are amongst the over 29 dialects of Yoruba. Would it not be appropriate to reason that all of them can be used with Yoruba interchangeably?
Additionally, the throne of the Olu of Warri is from Benin and that of Benin is from Ile-Ife. Therefore will it be justifiable to exclude the Yorubas from enjoying what they produce?
It is therefore on the basis of all the aforementioned that we wish to assert as follows:
1. That on the issue of the emergence of Omoba Tsola Emiko as the 21st Olu of Warri, the Itsekiris have crossed the rubicon. The process is irreversible.
2. Since you cannot force a willing employee on an unwilling employer of labour, the choice of Omoba Tsola Emiko as the  Ogiame is confirmed by both the Oracle and the good people of Warri kingdom.
3. This Omoba Tsola project is being driven by the moving train philosophy. In a moving train philosophy, if you are inside the train and you do not hold firmly onto your space, you will fall off. The train will not stop and wait for you. But if you are outside and desirous of being in the train and you are able to pursue and catch up, it will accommodate you.
However, what is not permissible in a moving train philosophy is to want to stand as obstacle in front of the moving train. Certainly, it will crush you".
at August 04, 2021