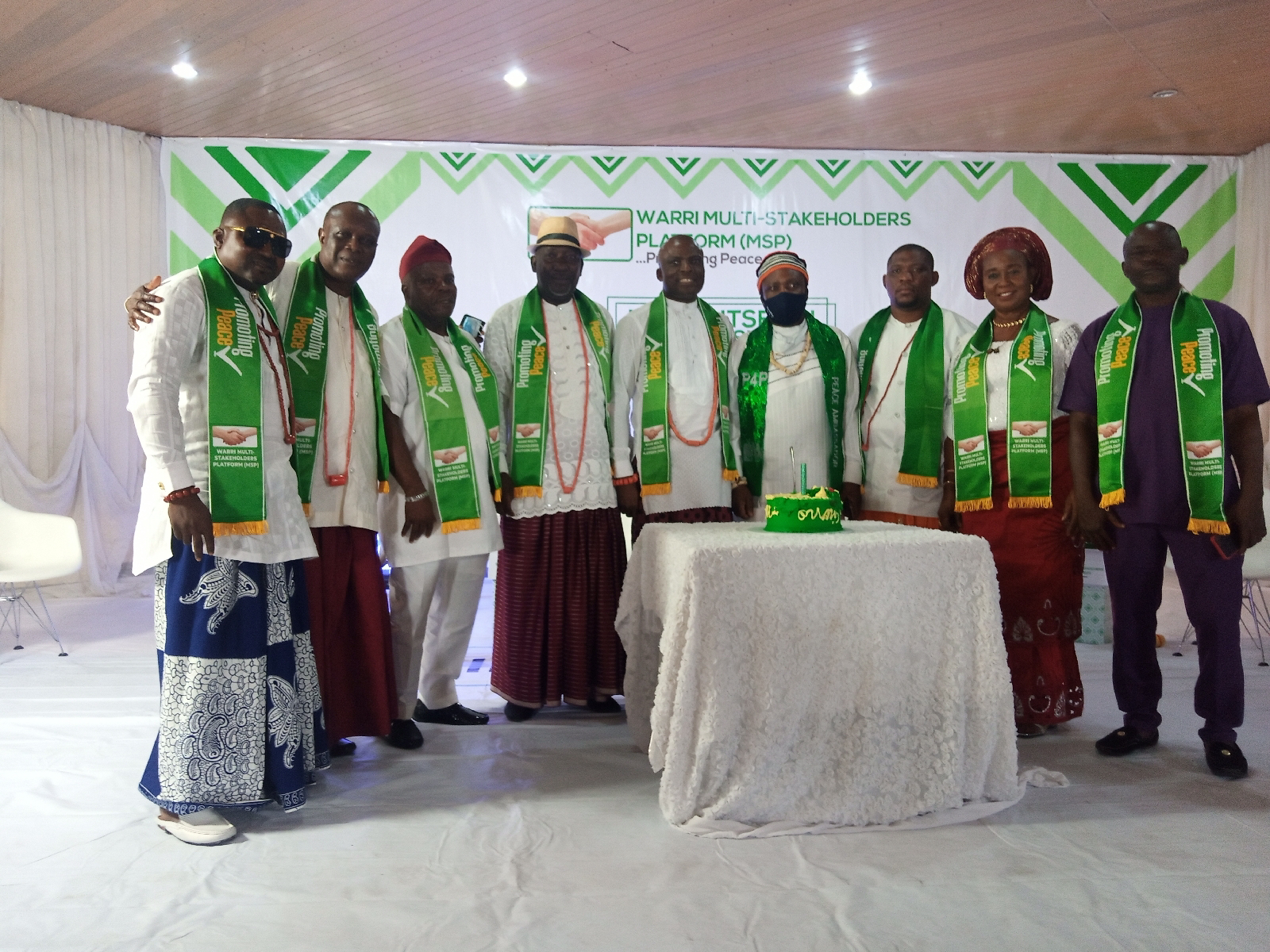 Group photograph of members of Warri MSP with PIND Network Co-ordinator and Warri MSP facilitator, High Chief Lawal Africas
News:
By Tetsoma Neyin
Warri Multi Stakeholders Platform (MSP), a brain child of PIND Foundation with a core mandate of promoting peace and equitable growth within the three Warri Local Government Areas in Delta State, has organized a one day Itsekiri, Ijaw leaders summit with the aim of making Warri investors more friendly.
With the theme being “Leaders’ Role in Fostering Peaceful coexistence, Security and Development which also witnessed lots of high profile academicians as well as conflict resolutionists within the shores of Nigeria was held on Thursday September 23, 2021 at Wellington Hotel, Effurun, Warri, Delta State.
Chairman of Warri MSP, Dr. Jeffrey Wilkie in his welcome address said that there is no better time to hold such a significant summit than this, as it will go a long way to build on the existing peace between the Itsekiris and Ijaws, saying that the summit which was specifically held during the week of World Peace Day, was equally significant as the world is now choosing Peace Over Conflict.

R-L, Delta State Commissioner for Technical Education, Hon. Princess (Mrs.) Ogbemi Daibo, Keynote Speaker, Amb. Dr. Godknows Boladei Igali, Executive Chairman of Warri South L.G.A., Hon. Michael Ejueyetsi Tidi Ph.D, Special Assistanct to Governor Okowa on Community matters, Hon. Louis Otuisi & other special guests
While speaking on the importance of peace in the society, Delta State Deputy Governor, Deacon Kingsley Otuaro who was ably represented by the Special Assistanct to Governor Okowa on Community matters, Hon. Louis Otuisi said that peace brings about sustainable growth and development to any given society, emphasizing that  Governor Okowa’s administration has done more in ensuring prevailing peace in Warri and its environs.
Deacon Otuaro recalled that the effort Governor Okowa made during the heat of vandalizing oil and gas facilities in 2016 by setting up a committee headed by himself that went into the creek to put an end to the criminal act.
In his goodwill message, the Executive Chairman of Warri South L.G.A., Hon. Michael Ejueyetsi Tidi Ph.D who is also co-host to the event thanked the organisers of the summit for putting up such a timely summit for the unification of Warri even as he used the opportunity to warn proponents of WADO City clamouring for the creation of an Urhobo Mega City from Warri City as a way of resolving the age-long controversy over the ownership of Warri to desist from such act as such act might cause another crisis in Warri.
The Warri South Council Boss further called on Leaders of the Summit to work with the Local Government and Security agencies to unravel those behind the WADO City, even as he appealed to all to continue to emphasize on Peace, Fairness and Justice in Warri and environs, stressing that a peaceful environment is what is needed for development to strive.
Speaking in a similar rein, the Delta State Commissioner for Technical Education, Hon. Princess Shola Ogbemi Daibo in her speech, lauded the initiative of the summit, adding that peace is a vehicle for sustainable development.
The commissioner called on traditional and community leaders, politicians, women and youth to eschew violence and embrace peace, tolerance and good neighbourliness on which our development is premised.
PIND Foundation who also sent its goodwill message through Dr. David Udofia congratulated members of Warri MSP for their relentless effort in ensuring that peace is restored in the three Warri L.G.A’s, stating that  from inception in 2018, PIND has worked with Warri MSP in building capacities on leadership, conflict management, resource mobilization and security which are concrete pillars for communities’ peaceful co-existence and development.
“Our collaborations in various interventions have contributed to the advancement of peace and security in Warri Kingdom and environs based on stakeholders opinions, even as we look forward to the Warri MSP’s continued growth, sustained ownership of the process for the long term. We at PIND are delighted to have supported you up till this point and will assist when called upon in the future” he said.

Dignataries & members of Warri MSP Cutting the Leaders Summit Unity Cake
In his thought provoking lecture, the keynote speaker, Amb. Dr. Godknows Boladei Igali stated categorically that every generation must prepare for their future, stressing that the Niger Delta Crisis was a legitimate agitation and that peace is a state of tranquility.
Ambassador Igali who pointed out that; Elite Consensus, learning from similar examples, adapting a framework for Alternative dispute resolution (A.D.R.) that is; solving problems outside the judiciary and non-violent protest approach are the four critical steps to solving dispute.
Another exciting aspect of the summit was the discussion section anchored by Dr. Austin Onuoha where the panelists comprises of Prof. Lucky Akaruese, Hon. Evelyn Omawumi Atsiangbe Urhobo, Hon. Joel Bisina (Ph.D) and Pastor (Mrs.) Bridget Affiah who in their various capacities spoke on some of the causes of crisis and also profer solutions in order to live in peace and harmony which is the bedrock for development.
Highpoint of the occasion was the cutting of the Unity Cake by dignitaries present, representatives of Itsekiris and Ijaws as well as  Members of Warri Multi Stakeholders platform which was moderated by PIND Network co-ordinator and Warri MSP facilitator, High Chief Lawal Africas.
At the end of summit, a communique which was signed by Dr. Jeffrey Wilkie, Co-Chairman, Itsekiri Ethnic Nationality and Ambassador Meshack Ubabiri, Co-Chairman, Ijaw Ethnic Nationality was issued out to the public.
In a chat with Warri Voice at the close of the summit, PIND Network Co-ordinator and Warri MSP facilitator, High Chief Lawal Africas thanked the guest speaker and other dignitaries as well as members of Warri MSP for their contribution in making the summit a huge success.
at October 11, 2021