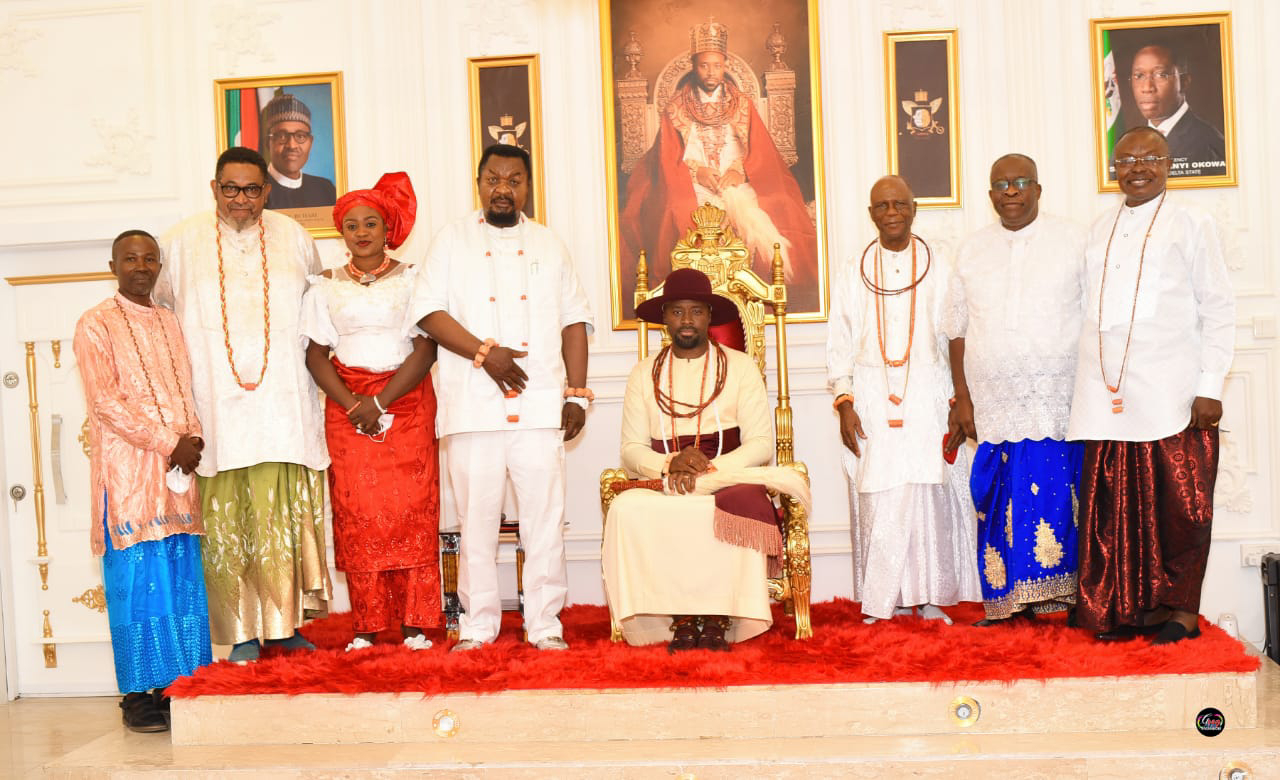 Olu of Warri, Ogiame Atuwatse III in a group photograph with the Iyatsere of Warri, Chief Johnson Amatserunleghe(4th: L-R), Chief Brown Mene(3rd: R-L) & delegates of Itsekiri Renaissance Group
News:
Itsekiri Renaissance Group pays homage to Olu of Warri
Itsekiri Renaissance Group (IRG), a platform of like-minded Itsekiris who have come together for the progress of Warri kingdom has paid a courtesy visit to Ogiame Atuwatse III, the Olu of Warri on Thursday December 16, 2021 at Aghofen, Warri to keep him abreast of their activities.
IRG which commenced operations early in 2021, has over 250 members who are made of historians, executives, technocrats, students, politicians, businessmen, young people, retirees and eminent Itsekiri men and women. 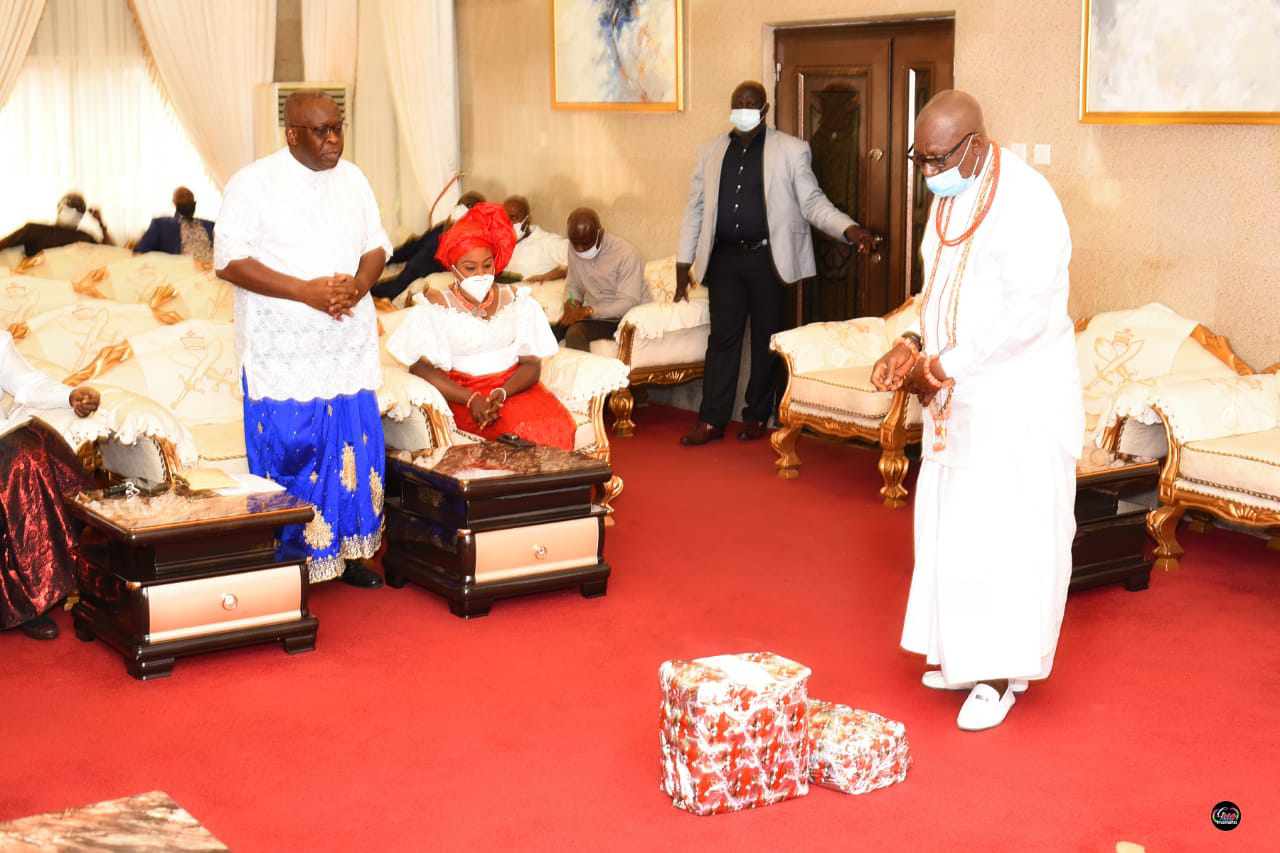 Chairman of Itsekiri Renaissance Group, Mr. Oti Ikomi giving his speech
In his brief speech, Chairman of Itsekiri Renaissance Group, Mr. Oti Ikomi thanked the Olu of Warri  for granting them audience and intimated the King on some of their activities, saying that, IRG was very active in promoting the Crown with their various publications leading to the historic August 21, 2021 most successful Coronation in Warri kingdom.
"We owe allegiance to the Crown and strive for the deliberate and strategic advancement of the Itsekiri nation", he stated.
Responding, Ogiame Atuwatse III, lauded the group's patriotism towards the growth and development of Warri kingdom.
I have said many times that every good idea that will build Iwereland is welcome.  I dont mind who gets the credit provided it is for the good of Iwereland. I am very happy about your group, It's as if you read my mind when you talked about your various committees", Olu of Warri stated.
The first class Warri Monarch averred further that "the one I am most interested  in is your Histo Cultural Committee. By the grace of God, I am a historian . Apart from being the Olu of Warri by divine order, I also have always wanted to become a Professor of History". 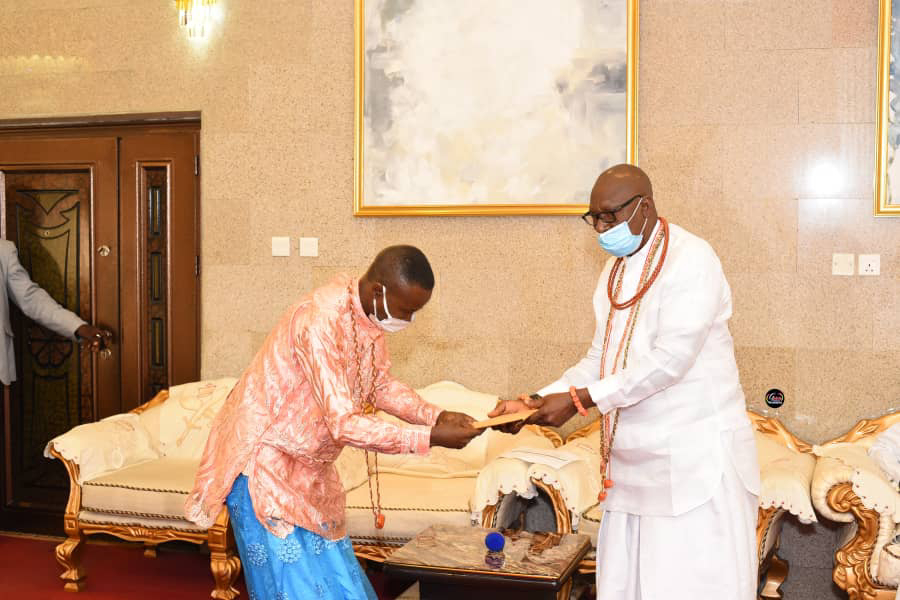 Secretariat Adninistrator of IRG, Ulisanmi Edukugho presenting a copy of the IRG Chairman's speech to Ogiame  through the Secreatary, Warri Council of Chiefs, Chief Eugene Ikomi.
"Everyone  whose mother, grandmother or great grandmother is Itsekiri and is happy to be with us the door of the palace is open for such. Even those who have lived in Warri for very long, and feel they want to be one of us, are welcomed", Ogiame Atuwatse III averred.
at December 18, 2021