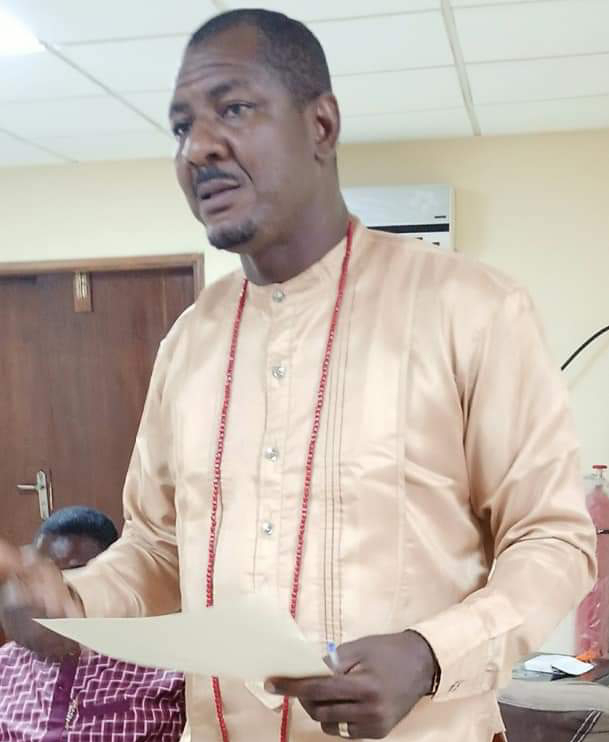 President of National Association of Itsekiri Graduates, Comr. Ben Eyitemi Eburajolo
News:
Chevron mobilize Ekpan youths to disrupt Itsekiri peaceful protest - NAIG
National Association of Itsekiri Graduates(NAIG) has accused Chevron Nigeria Limited today Monday March 21, 2022 of mobilising Ekpan Youths  to disrupt the peaceful protest staged against Chevron over the marginalisation of Itsekiri Graduates in VTP 5 and VTP 6 in Chevron working as slaves over the years.
The Ekpan youths who came out enmasse with machetes and other dangerous weapons attacked the unarmed Itsekiri Graduates protesters from all sides, carted away with some valuables and injuring some  protesters in the process.
According to the group, the peaceful protest was for Chevron to reopen the Vocational Training Programme and regularize Itsekiri Graduates in VTP5 and VTP6 who are over due for promotion.
Addressing newsmen shortly after the disruption of the peaceful protests at the NAIG Secretariat in Ugbori, Warri, President of the Graduate body, Comr. Ben Eyitemi Eburajolo stated that "At about 11am during the course of the peaceful protest, Ekpan youths sponsored by  Chevron Nigeria limited carrying machetes and other dangerous weapon came to attack Itsekiri graduates fully aware that we are unarmed''
''We are calling on the security operatives to investigate the issue and bring the perpetrators to book and pay for the crime committed''
''we are giving CNL seven days to do the needful by responding to  our demand''
''we are writing a petition to the appropriate security operation to investigate the issue of manning and attempted murder by CNL, we will not rest until our demands are met''.
at March 21, 2022 No comments: 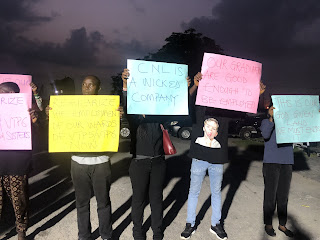 As part of efforts to intercede for peace and progress in Warri kingdom, Iwere Women Prayer Network with its theme, “Enough is Enough” has yet again come out enmasse to pray for a change which will bring about growth and development in Warri kingdom.

The Programme which is a brainchild of Olori Atuwatse III and backed up by the Wives of  Chiefs of Warri kingdom took place on Wednesday March 16, 2022 at the Olu’s Palace (Aghofen). 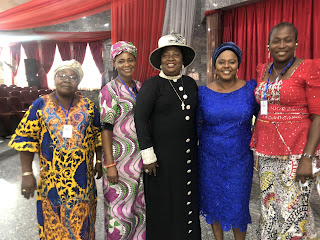 Group photograph of some Chief Wives led by the Coordinator of the Programme, Pastor Mrs. Juliet Olley

Addressing participants at the event which is the third of its series, wife of Chief Omolubi Newuwumi, Mrs. Patience Omolubi thanked God Almighty for the vision, Olori Atuwatse III, Chiefs wives and the entire Itsekiri women for their relentless efforts in sustaining the Programme,  adding that the success of every home is in  the hands of a praying wife. 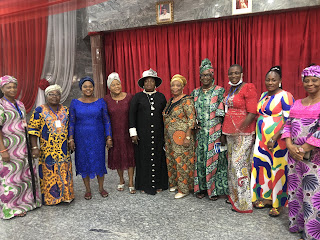 Speaking on behalf of Olori Atuwatse III,   the Co-ordinator of the  programme who also doubles as the Guest Speaker, Pastor (Mrs.) Juliet Olley appreciated  the Olori who is the brain behind the laudable vision for giving women the opportunity to gather and pray for Iwere land. 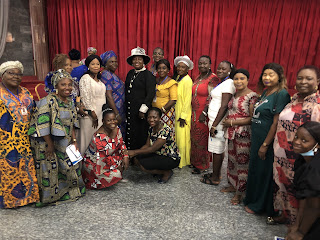 Pastor (Mrs.) Olley who took her sermon from Luke  chapter 10 verse 19 stated that it is time for the women of Warri kingdom to cry out to God for a change in the land especially in the forth-coming  2023 general elections.

" We need God to put the right people in position of authority for Iwere land to move forward”,  She said.