Newly Sworn in Women Leader, Madam OritsematosanNuko receiving her Certificate from the immediate past Women Leader of the group, Chief (Mrs.) Mercy Olowu

Ikpere-Ale Meje Women Traders Association has sworn-in new executives that will pilot the affairs of the Association for the next four (4) years.

The swearing in ceremony which took place today at the Ugborodo House Ajamimogha, was done by the out-going leader of the Association, Chief (Mrs) Mercy Olowu. 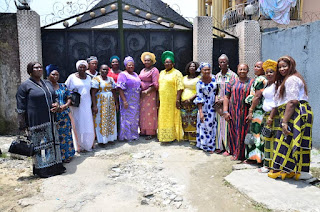 Some Executives and members of the group

Shortly before the swearing in ceremony, founder of the group, Chief (Mrs) Mercy Olowu while swearing in the new executives, stated that as directed by the Olu, election should not tear the Association apart, they therefore gave out four key positions to the opposition group inspite of their absence at the venue.

In her acceptance speech, the newly sworn-in leader, Madam Oritsematosan Nuko thanked the out-going executives for keeping the Association united, strong, vibrant and promised to take the Association to a higher level. She enjoined members of the opposition to join hands with them to keep the ship sailing to the benefit of the larger Ugborodo Community in general. 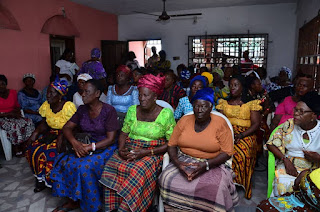 The position for Financial Secretary, PRO, Asst. Secretary and a member are yet to be filled