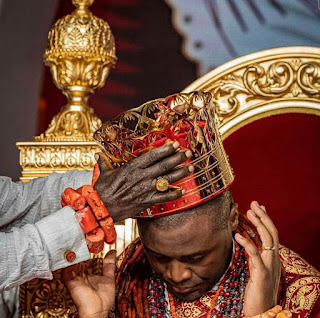 The first Coronation Anniversary of the 21st Olu of Warri, His Majesty, Ogiame Atuwatse III, begins from Wednesday August 17 to Sunday August 21 in Warri, Delta State.

The Coronation schedules was gathered from a press statement issued by the Palace, signed by the Chairman, Media and Publicity Committee of the Anniversary ceremony, Prince Yemi Emiko and sent to Warri Voice Newspaper Friday July 8, 2022.

Recall that the crowning of the King, “brought so much excitement, vitality, innovation and hope to the Itsekiri people and all those living within the kingdom, spread across three local government areas in Delta State and beyond”.

The Events, would be kick- started with Praise Day activities, including extensive thanksgiving, praise and worship session, inside the main Church Auditorium at the Palace in Warri.

It will be followed the next day with ‘Warri Food Festival’, a novel idea of His Majesty, to showcase different food items, sources, mode of preparation as well as serving of the cuisines. This would be followed closely same day with the Iwere Music Concert and launch of the Iwere Royal Society.

Friday August 19, has been declared Health Day, where various health care services, would be launched and delivered to the people by His Majesty, at the Palace of Chief Nana Olomu, the great Merchant of the Niger Delta and successful Itsekiri businessman, who was Governor of the Benin River Protectorate, under the British Colonial administration. Health Care service delivery is one of the corner stone policies of Ogiame Atuwatse III’s reign.

The statement, further affirmed that activities will shift to Ode Itsekiri, Headquarters of Warri Kingdom, on Saturday August 20, where Itsekiri in their hundreds of thousands, will take turn to pay homage to their revered First Class Monarch, amid cultural display, traditional dances, drumming, singing, exhibition of Itsekiri arts and history as well as show off of family heirloom by various Itsekiri Nobles, in a joyous and exciting atmosphere.

Prince Emiko, disclosed that the anniversary would be rounded off on Sunday August 21, which is the actual coronation day of the 21st Olu of Warri, with a thanksgiving service inside the church at Aghofen, the Palace of the Olu of Warri in Warri mainland.

The Statement, assured all and sundry that the gates of the Palace, would be opened to all Itsekiri sons and daughters, home and abroad, friends of Iwere land and to their neighbors and well-wishers, who desire to partake peacefully in the celebrations.