The apex youth body of Itsekiri Nation, Itsekiri National Youth Council, INYC has called on all Itsekiri youths from far and near to brief them on the executive’s recent visit to Chief Government Ekpemukpolo with regards to the surveillance contract awarded to him by the Federal Government.

The meeting which was held on Saturday September 10, 2022 at Ikengbuwa Primary School Field, witnessed lots of Itsekiri youths in attendance.

Addressing the mammoth crowd, President of Itsekiri National Youths Council, Comr. Isaac Oritseweyinmi Agbateyiniro stated that the main agenda of the meeting was to brief them on their visit with High Chief Government Ekpemukpolo and how the contract will be structured across all Itsekiri communities. Comr. Agbateyiniro said that, he led INYC to Chief Government Ekpemukpolo to request for part of the Pipeline Surveillance Contract that covers Itsekiriland.

“High Chief Ekpemupolo promised to work with Itsekiris with respect to their area as spelt out in the Contract. He revealed that he had sublet three kilometers of the line to Ayiri Emami based on an understanding from Abuja”

“Tompolo had been making overtures to Itsekiri with regards to the structure of the contract as it concerns Itsekiri but was discouraged from harmonizing with them. He assured us of working with the Itsekiri National Youth Council towards the smooth running of the contract and protection of Federal Government installations in Itsekiriland”, he averred.

Comrade Esimaje Awani and other leaders of core Itsekiri youth groups like the Itsekiri People’s Congress led by Comr. Raymond Aderojo, Gabriel Mene Ejegi (HostCom), Comr. Ajatiton Isaac (Chairman, INYC Edo State) who accompanied Comr. Agbateyiniro on the visit took turns to commend the leadership of the Council for displaying transparency and accountability, stating that things like this used to be shrouded in secrecy. 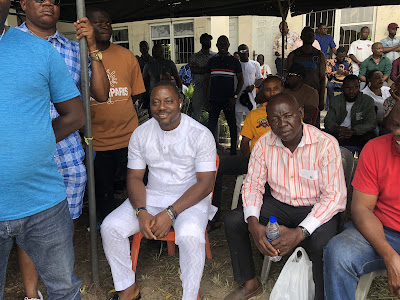 The Over 3,000 Itsekiri youths at the Congress drawn from Edo State, Okpe, Sapele, Udu, Ethiope West and the three Warri LGAs passed a vote of confidence on the Comr. Isaac Oritseweyinmi Agbateyiniro-led INYC for going to Tompolo to request for Itsekiri slots in the contract in the spirit of brotherliness of the creek that we all inhabit in the Niger Delta.