Commodore Omatseye Nesiama with some of the flood victims

The Delta South Senatorial Candidate of the New Nigerian People’s Party, NNPP, Commodore Omatseye Nesiama (Rtd) has visited flood victims at Igbide and Ofagbe Communities in Isoko South and Isoko North Local Government Areas respectively to cushion the effects of the flooding on them by donating relief materials to the flood victims.

Some of the items donated to the flood victims includes, bags of garri, bags of rice, loaves of bread, tuber of yams, sugar, bags of salt, indomie noodles, spaghetti, detergents and toiletries, onion and pepper pastes, biscuits and power oil.

Addressing newsmen, Commodore Omatseye Nesiama urged politicians and well meaning individuals to put politics aside irrespective of the political affiliation and render help to the flood victims who are suffering. 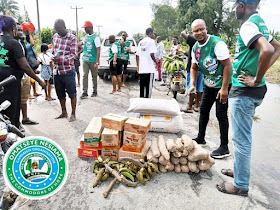 Commodore Nesiama who was flanked by the NNPP Delta State House of Assembly Candidate, Isoko North Constituency, Dr. Daniel Uroghome also called on the Federal ànd Delta State Governments to immediately put in measures at mitigating the perennial flood as well as its effect on the people.

According to the Commodore of Hope, “The people should find succor. People should be able to eat, get shelter, IDP camp should be opened for free,” just as he  expressed shock at the level of damage the flood has caused the people in the two communities.

He averred: “The magnitude of this flood, I do not know, as it did not get to me until I got to this place to see for myself. I was on my way to Igbide to sympathize with the people. 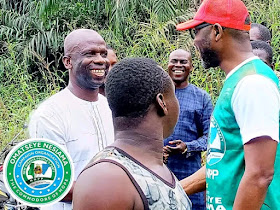 “That even with the boat it will take us two hours to get there because there are no speed boat, it has to be paddle. And we have things that we want to give to those people in distress.”

Delta State NNPP Chairman,Chief Friday Efetobor who received the relief materials on behalf of Igbide people, called on the Federal and State Government to come to their rescue.”We need help from them. We need rescue now. You can see my village people, they are here.”

Chief Efetobor appreciated Commodore Omatseye Nesiama for the donations of the relief materials to the people who were ravaged by flood.

“So, let me appreciate the incoming senator at least your message will get to my people in my village, I want to appreciate you so much. Thank you very much for your rescue, God bless you.”

Two of the flood victims from Ofagbe Community, Baby Oviemuno and Bright Atara also appreciated Commodore Omatseye Nesiama for the donation of the relief materials to them.

They said the flood wrecked havoc in the community stressing virtually all buildings and farm lands were destroyed living them in hunger and have relocated from their homes like many others.

The Chairman of Ofagbe Community, Alhaji Musa Bob Oviemuno who received the relief materials from Commodore Omatseye Nesiama said many buildings in their community were submerged by the flood.

Alhaji Oviemuno who was flanked by the Vigilante Chairman of Ofagbe Community, Onyema Jerry also appreciated Commodore Nesiama and his entourage for their visit as well as the donation of the relief materials to the flood victims in their Community.

The Ebe Primary School in Ovrode Community, a nearby community leading to Ofagbe was also swallowed by the ravaging flood as accessing the Communities is with the use of speed boats which costs one thousand naira per passenger.