Iwere Women Prayer Network, an initiative of her Majesty, Olori Atuwatse III, and backed up by wives of Chiefs from Warri kingdom has put together a one day prayer retreat for God to destroy territorial powers holding the land captive.

The one day prayer quarterly retreat with the theme  “Triumphing over territorial powers” which was held on Wednesday  October 19, 2022 at the Olu’s Palace(Aghofen) Warri, had in attendance prominent Itsekiri women as well as other tribes from within the three Warri Local Government Areas.

Bishop Olley also used the opportunity to formally congratulate. His Imperial Majesty, Ogiame Atuwatse III, the Olu of Warri for his well deserved conferment with the prestigious National honour of Commander of the Order of the Federal Republic of Nigeria (CFR) by President Muhammadu Buhari in Abuja recently, saying that Warri kingdom would not have asked for a better Monarch like Ogiame Atuwatse III who has been a channel of blessing to the Itsekiri people. 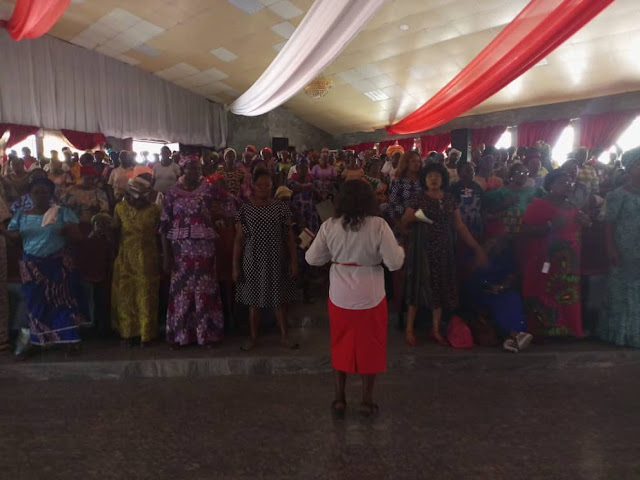 Guest speaker of the event, Bishop  God’s evidencene Awadasenoritse who took his sermon from the book of Exodus 12 verse 13 declared that family negative patterns does not break, rather, it is God that lift His children from that family long age pattern when they call upon God in prayers.

Bishop Awadasenoritse who took the women through rounds of powerful deliverance prayers for the land and the throne said that the blood of Jesus brings the totality of divinity to humanity for the liberation of man.

Warri Voice Newspaper can state authoritatively that the retreat which was attended by hundreds of women was also used to enlightened women on the need to stay healthy at all times because health is wealth.