The convener of Nation Builders Contest Pastor Ulisanmi Edukugho and his team recently  paid a courtesy visit to the Olu of Warri on Tuesday 1st Nov 2022 at the Olu's Palace ( Aghofen) in Warri.

The Olu welcomed the team  through one of his chiefs, Chief Solomon Areyenka the Eson of Warri Kingdom before inviting the group to state their mission. Ulisanmi Edukugho speaking for the group çongratulated His Majesty on the recent conferment of the award of Comander of the Federal Republic on him by  President Muhammadu Buhari noting that the award is a clear attestation to His Majesty the Olu's leadership strides and achievements not only amongst his people the Itsekiris but in the nation.

He went on to state that the team has come to seek the Monarch's blessings over their ongoing program Tagged: Nation Builder's  Contest a series of competitions for secondary age learners in Warri urban and rural communities covering Essay writing , debates , poetry recitation, cultural dancing and music. He explained that the objective of the programme is to raise a new generation of leaders for Nigeria amongst the secondary learners in order to secure a future for Nigeria . He solicited for the Monarch's support and recommendation.

Responding , the Olu of Warri Ogiame Atuwatse III thanked Ulisanmi Edukugho for coming with his team. He appreciated what they are doing and  he encouraged them not to relent in their efforts . He went on to  inspire them to know that God can do for them even beyond what they imagined. He also encouraged them that support will come to them and to what they are doing in ways and from places they did not expect. He promised to look at the programme document they presented and get back to them. 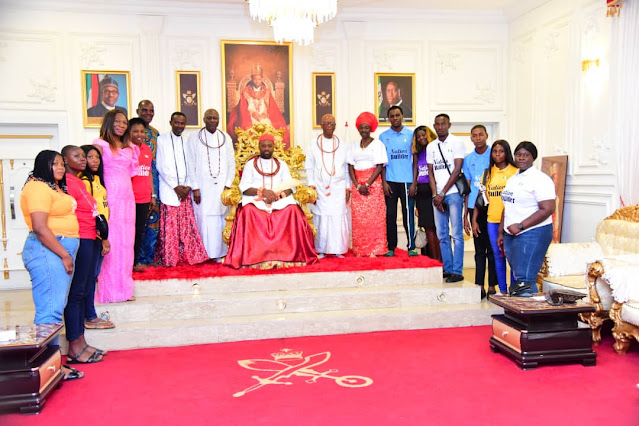 Other dignitaries present at the occasion include Chief Brown Mene , the Ogwaolusan of Warri , Chief Dr Roland Oritsejafor, a one time  Federal Minister of State for Defence, Chief Eugene Ikomi, Secretary Warri Council of Chiefs, Mrs Flora Binitie , Pastor Charles Erumi , Miss Patricia Brotugbare ( aka The Nigerian Mobile Educator)  and a host of others.

Nation Builders' Contest organized by Peligate Education, a subsidiary of Peligate Resources Company Ltd, will run from October 29th 2022 to November 25th 2022 with a Grand finale at which prizes and awards will be giving to winning Students and some distinguished Nigerians.