NDDC Board: We will not accept the nomination of Onochie - Rita Lori

NDDC Board: We will not accept nomination of Onochie ---Rita Lori 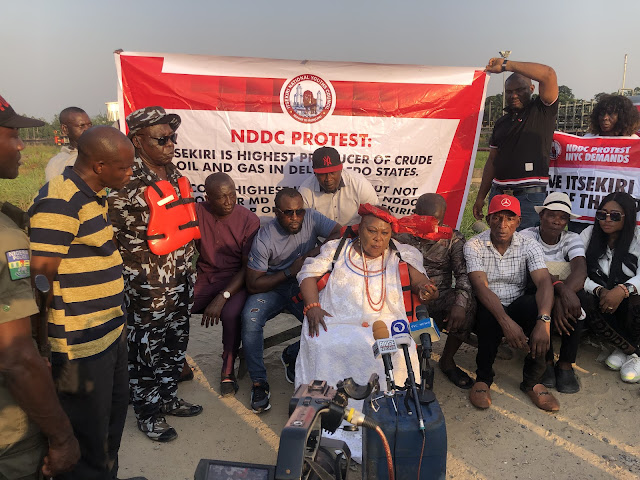 Chief Rita Lori-Ogbebor has rejected the nomination of Lauretta Onochie from a non-Oil Producing area by President Muhammadu Buhari and an injustice to Itsekiri nation that produces the highest quantum of oil and gas in Delta State and second throughout Nigeria.

Addressing a mammoth crowd of hundreds of Itsekiri women at the Olu Palace field on Saturday, the social crusader and activist stated that since it is the turn of Delta State to produce both the Chairman and Managing Director of the Niger Delta Development Commission, NDDC and the Act establishing the Agency stipulates clearly that the position must go to the highest oil producing ethnic nationality, it is only right that Itsekiri be made the Chairman and or Managing Director of the Commission.

Chief Rita Lori-Ogbebor who ventured into the creeks on Friday to the massive Obodo Flow Station under OML 150 and operated by Conoil in Warri South, in solidarity with protesting Itsekiri youths noted that "we cannot be bearing the adverse effects of oil and gas production, contributing hugely to the financial well being of Nigeria and yet be oppressively deprived of our well Constitutional deserved position this time around", saying that "we shall resist it", but appealed to the youths to tread softly and avoid destruction of any kind while agitation and negotiations continues.

She expressed regrets that some selfish Itsekiri men and politicians are behind the support and nomination of Onochie in a kill and divide arrangement. She applauded the protesting youths and the womenfolk even as she promised to take the protest to the doorstep of Aso Rock and the floor of the Senate who she tasked on rejection of the nomination of Lauretta Onochie.

Chief Rita Lori-Ogbebor together with all the women and men present at the conference ground then invoke traditional curses on Itsekiri greedy politicians/individuals who indulge in selling away Itsekiri rights and privileges to others and also pocket funds belonging to the nation, converting them to their personal uses.

She revealed that some groups of Itsekiri men  withdrew #300m illegally from the coffers of the IRDC and charge the youths to go and demand the money from them as the fund were for the development/building of water facility, hospitals, schools, provision of skills acquisitions and other empowerment programs that would alleviate the suffering of the people in the rural communities.

The woman leader who has being in the struggle for the establishment of DESOPADEC and the NDDC all these years maintained that these agencies were not created for politicians to loot the funds and deprive them from meeting their Constitutional mandate to the oil bearing people and communities.

Other speakers at the conference supported Chief Rita Lori-Ogbebor on the struggle, promised to go along with her and prayed God to grant her long life and the strength to continue with the struggle.